Fayetteville is the largest city in Lincoln County. The city was established in 1809 by an Act of the Tennessee General Assembly. The act became effective on January 1, 1810. 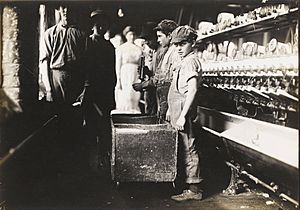 Child labor at the Elk Cotton Mills in Fayetteville, 1910. Photo by Lewis Hine.

The lands that include Lincoln County and Fayetteville were originally part of Cherokee and Chickasaw land. They were ceded to the United States in 1806.

The city was named for Fayetteville, North Carolina, where some of its earliest residents had lived before moving to Tennessee. The earlier town was named for Marquis de Lafayette, a general who fought for the United States during the American Revolution. Lincoln County was named for Major General Benjamin Lincoln, second in command of the U.S. Army at the end of the Revolutionary War.

The earliest white settler was Ezekiel Norris, who gave the one hundred acres upon which the city was built. In addition to Ezekiel Norris, other founding fathers of Fayetteville include: Alexander and Andrew Greer, William Edmonson, and Matthew Buchanan.

In 1995, the International Gospel Hour radio broadcast, founded in Texarkana, Texas, by the clergyman V. E. Howard was transferred to the West Fayetteville Church of Christ in Fayetteville under the minister Winford Claiborne.

According to the United States Census Bureau, the city has a total area of 7.3 square miles (19 km2), all land.

One of the most famous landmarks of Fayetteville is the remains of the Stone Bridge, commonly known by the locals of Fayetteville as the “Old Stone Bridge”. It was in 1860 that John Markum and Patrick Flannery, the architects and contractors, began the building of the bridge. The bridge, consisting of six arches, was completed in January 1862 with a final cost of $40,000. In 1863, during the Civil War, the bridge was ordered burned by General William T. Sherman, but this order was disobeyed because the river was easily forded at the base of the bridge. The bridge stood until 1969, when it collapsed due to flooding.

The first courthouse for Lincoln County, which was made of brick, was completed in 1815. It was used as local headquarters by Union troops during the Civil War. The building was replaced by an Italianate structure in 1874. This second courthouse was demolished and replaced by the current Colonial Revival-style building in 1970.

The Camp Blount marker, erected in 1998, stands along Huntsville Highway (US-431) near the WalMart shopping center. The camp was located along the Elk River and was a meeting point for the Tennessee soldiers who were serving under General Andrew Jackson in the Creek War of 1813-1814. Camp Blount also was a meeting point for soldiers during the Seminole Wars in 1818 and 1836, and for both Confederate and Federal troops during the Civil War.

As far back as 1889, there are records for the harness racing that takes place still today at the fairgrounds. The racetrack was made of red clay until 1978 when it was converted to an all weather track by grading it and covering it in limestone dust. Other elements of the fair include a demolition derby, rides, food vendors, a cattle showing, pageants, art competition, and concerts.

Bavarian-based Grammer AG operates a site in Fayetteville. It manufactures components for the automotive industry.

All content from Kiddle encyclopedia articles (including the article images and facts) can be freely used under Attribution-ShareAlike license, unless stated otherwise. Cite this article:
Fayetteville, Tennessee Facts for Kids. Kiddle Encyclopedia.