Tarentum is a borough in Allegheny County in the U.S. state of Pennsylvania. It is 22 miles (35 km) northeast of Downtown Pittsburgh, along the Allegheny River. Tarentum was an industrial center where plate glass and bottles were manufactured; bricks, lumber, steel and iron novelties, steel billets and sheets, sack and wrapping paper were also produced.

The Pennsylvania Railroad operated a station in Tarentum; its rail line ran through the town. The population was 4,530 at the 2010 census. Two statues of Hebe, the Greek goddess of youth, are displayed by the borough in Tarentum. 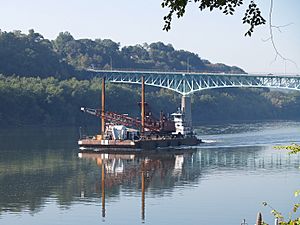 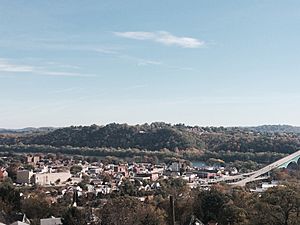 All content from Kiddle encyclopedia articles (including the article images and facts) can be freely used under Attribution-ShareAlike license, unless stated otherwise. Cite this article:
Tarentum, Pennsylvania Facts for Kids. Kiddle Encyclopedia.