It was constructed under the supervision of Skidmore, Owings and Merrill, with chief designer Bruce Graham and structural engineer Fazlur Khan. When the building topped out on May 6, 1968, it was the second-tallest building in the world and the tallest outside New York City. It is currently the fourth-tallest building in Chicago and the eighth-tallest in the United States, after One World Trade Center, the Willis Tower, 432 Park Avenue, the Trump Tower Chicago, the Empire State Building, the Bank of America Tower, and the Aon Center.

When measured to the top of its antenna masts, it stands at 1,500 feet (457 m). The building is home to several offices and restaurants, as well as about 700 condominiums. It also contains the third-highest residence in the world, after the Burj Khalifa in Dubai and the Trump Tower in Chicago. The building was named for John Hancock Mutual Life Insurance Company, a developer and original tenant of the building. On February 12, 2018, John Hancock Insurance requested that its name and logos throughout the building’s interior be removed immediately.

From the 95th floor restaurant, diners can look out at Chicago and Lake Michigan. The Observatory (360 Chicago), which competes with the Willis Tower's Skydeck, has a 360° view of the city, up to four states, and a distance of over 80 miles (130 km). The Observatory has Chicago's only open-air SkyWalk and also features a free multimedia tour in six languages. The 44th-floor sky lobby features America's highest indoor swimming pool. 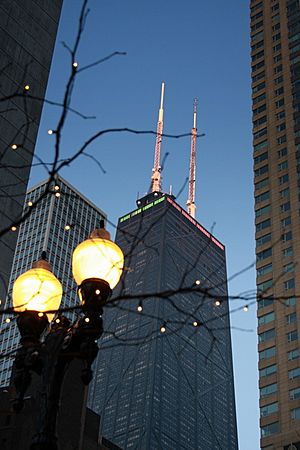 The project, which would at that time become the world's second tallest building, was originally conceived of and owned by Jerry Wolman in late 1964, the project being financed by John Hancock Mutual Life Insurance Co. Construction of the tower was interrupted in 1967 due to a flaw in an innovative engineering method used to pour concrete in stages that was discovered when the building was 20 stories high. The engineers were getting the same soil settlements for the 20 stories that had been built as what they had expected for the entire 99 stories. This forced the owner to stop development until the engineering problem could be resolved, and resulted in a credit crunch. This situation is similar to the one faced during the construction of 111 West Wacker, then known as the Waterview Tower. Wolman's bankruptcy resulted in John Hancock taking over the project, which retained the original design, architect, engineer, and main contractor. 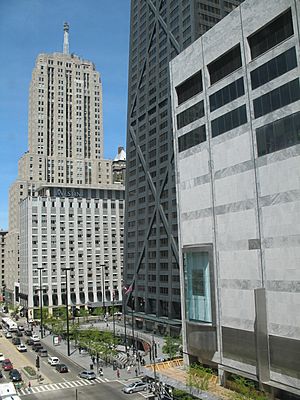 The building's first resident was Ray Heckla, the original building engineer, responsible for the residential floors from 44 to 92. Heckla moved his family in April 1969, before the building was completed.

On November 11, 1981, Veterans Day, high-rise firefighting and rescue advocate Dan Goodwin, for the purpose of calling attention to the inability to rescue people trapped in the upper floors of skyscrapers, successfully climbed the building's exterior wall. Wearing a wetsuit and using a climbing device that enabled him to ascend the I-beams on the building's side, Goodwin battled repeated attempts by the Chicago Fire Department to knock him off. Fire Commissioner William Blair ordered Chicago firemen to stop Goodwin by directing a fully engaged fire hose at him and by blasting fire axes through nearby glass from the inside. Fearing for Goodwin's life, Mayor Jane Byrne intervened and allowed him to continue to the top. 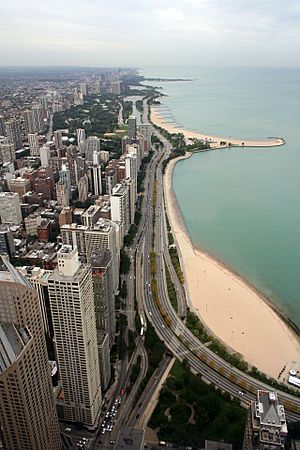 The John Hancock Center was featured in the 1988 movie Poltergeist III.

On December 18, 1997, comedian Chris Farley was found dead in his apartment on the 60th floor of the building.

On March 9, 2002, part of a scaffold fell 43 stories after being torn loose by wind gusts around 60 mph (100 km/h) crushing several cars, killing three people in two of them. The remaining part of the stage swung back-and-forth in the gusts repeatedly slamming against the building, damaging cladding panels, breaking windows, and sending pieces onto the street below.

On December 10, 2006, the non-residential portion of the building was sold by San Francisco based Shorenstein Properties LLC for $385 million and was purchased by a joint venture of Chicago-based Golub & Company and the Whitehall Street Real Estate Funds. Shorenstein had bought the building in 1998 for $220 million.

Hustle up the Hancock is an annual stair climb race up the 94 floors from the Michigan Avenue level to the observation deck. It is held on the last Sunday of February. The climb benefits Respiratory Health Association. The record time as of 2007 is 9 minutes 30 seconds. 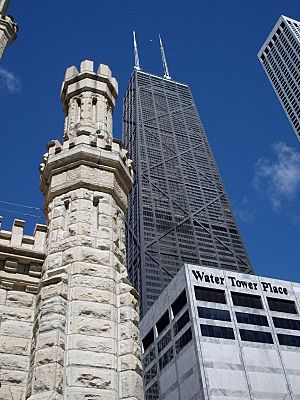 The building is currently home to the transmitter of Univision's WGBO-DT (channel 66), while all other full-power television stations in Chicago broadcast from Willis Tower. The City Colleges of Chicago's WYCC (channel 20) transmitted from the building until November 2017, when it departed the air as part of the 2016 FCC spectrum auction, and will eventually return as a part of WTTW's spectrum from Willis Tower.

On November 21, 2015, a fire broke out in an apartment on the 50th floor of the building. The Chicago Fire Department was able to extinguish the fire after an hour and a half; five people suffered minor injuries.

On Sunday, February 11, 2018, a fire in a car on the seventh floor required 150 firefighters to put out. It should be noted that the buildings life safety sprinkler system put out the fire, the firemen were responding to the alarms.

All content from Kiddle encyclopedia articles (including the article images and facts) can be freely used under Attribution-ShareAlike license, unless stated otherwise. Cite this article:
John Hancock Center Facts for Kids. Kiddle Encyclopedia.