Chicago's Chinatown is a neighborhood located in the South Side of Chicago, centered on Cermak and Wentworth Avenues. Over a third of Chicago's Chinese population resides in this ethnic enclave, making it one of the largest concentrations of Chinese people in the United States. The present Chicago Chinatown formed around 1912, after settlers moved steadily south from near the Loop where the first enclaves were established in the 19th century.

Chinatown is sometimes confused with an area on the city's North Side sometimes referred to as "New Chinatown", which is centered on Argyle Street and is somewhat of a misnomer given that it is largely populated by people of Southeast Asian heritage.

Looking to escape the anti-Chinese violence that had broken out on the west coast, the first Chinese arrived in Chicago after 1869 when the First Transcontinental Railroad was completed. By the late 1800s, 25% of Chicago's approximately 600 Chinese residents settled along Clark Street between Van Buren and Harrison Streets in Chicago's Loop. In 1889, 16 Chinese-owned businesses were located along the two-block stretch, including eight grocery stores, two butcher shops and a restaurant. In 1912, the Chinese living in this area began moving south to Armour Square. Some historians say this was due to increasing rent prices. Others see more complex causes: discrimination, overcrowding, a high non-Chinese crime rate, and disagreements between the two associations ("tongs") within the community, the Hip Sing Tong and the On Leong Tong. The move to the new South Side Chinatown was led by the On Leong Merchants Association who, in 1912, had a building constructed along Cermak Avenue (then 22nd Street) that could house 15 stores, 30 apartments and the Association's headquarters. While the building's design was typical of the period, it also featured Chinese accents such as tile trim adorned with dragons. 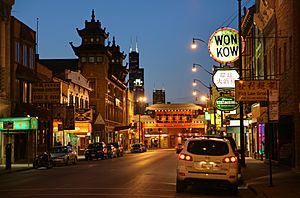 In the 1920s, Chinese community leaders secured approximately 50 ten-year leases on properties in the newly developing Chinatown. Because of severe racial discrimination, these leases needed to be secured via an intermediary, H. O. Stone Company. Jim Moy, then-director of the On Leong Merchants Association, then decided that a Chinese-style building should be constructed as a strong visual announcement of the Chinese community's new presence in the area. With no Chinese-born architects in Chicago at the time, Chicago-born Norse architects Christian S. Michaelsen and Sigurd A. Rognstad were asked to design the new On Leong Merchants Association Building in spring, 1926. Michaelsen and Rognstad drew their final design after studying texts on Chinese architecture. When the building opened in 1928 at a cost of a million dollars, it was the finest large Chinese-style structure in any North American Chinatown. The On Leong Association allowed the Chinese Consolidated Benevolent Association to put its headquarters in the new building and also used it as an immigrant assistance center, a school, a shrine, a meeting hall, and office space for the Association itself. It was often informally referred to as Chinatown's "city hall." In 1928, Michaelsen and Rognstad designed two other buildings in the area—Won Kow Restaurant, Chinatown's oldest restaurant, and the Moy Shee D.K Association Building, the former receiving a two-story addition in 1932.

During the late 1980s, a group of Chinatown business leaders bought 32 acres (130,000 m2) property north of Archer Avenue from the Santa Fe Railway and built Chinatown Square, a two-level mall consisting of restaurants, beauty salons and law offices, flanked by 21 new townhouses. Additional residential construction, such as the Santa Fe Gardens, a 600-unit village of townhouses, condominiums and single-family homes still under construction on formerly industrial land to the north. Perhaps the most outstanding feature of the new addition was the creation of Ping Tom Memorial Park in 1999; located on the bank of the Chicago River, the park features a Chinese-style pavilion that many consider to be the most beautiful in the Midwest.

In 1990, about 10,000 Chinese lived in Chinatown's business district and the area south of 26th Street; several Italian Americans still remained in the neighborhood.

As of 2013[update], about 8,000 people lived within Chinatown itself, and 90% were ethnic Chinese. As of that year, many of the residents were elderly. 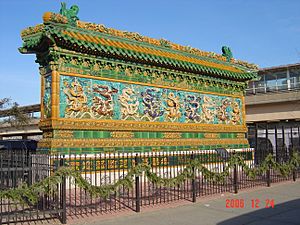 A 1942 article from the Chicago Tribune stated that the strong family ties among the residents of Chinatown meant that there was little juvenile delinquency present in the community.

The Dan Ryan Expressway and the Stevenson Expressway intersect over the southside of Chinatown. The Stevenson's exit 293A (northbound exit and southbound entrances) gives Chinatown commuters immediate access to the expressways via Cermak Road, only one block east of Wentworth Avenue. There is metered street parking throughout the area, as well as two pay parking lots located on Wentworth Avenue.

Several forms of public transportation are also available in Chinatown. The Chicago Transit Authority operates both an elevated train and four bus routes that service the area. The Red Line, the CTA's busiest transit route, stops 24/7 at the Cermak–Chinatown station located in the heart of Chinatown near the corner of Cermak Road and Wentworth Avenue. Running north–south, the #24 bus route runs on Wentworth Avenue on the eastside of Chinatown, while the #44 route runs on Canal Street on the westside. The #21 runs east–west on Cermak Road, and the #62 runs southwest–northeast on Archer Avenue. There is a taxicab stand on Wentworth Avenue, and a water taxi service also runs along the Chicago River from Michigan Avenue to Ping Tom Memorial Park in Chinatown during the summer months. 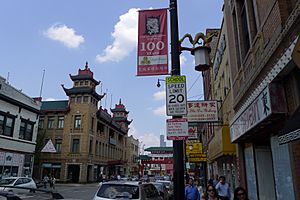 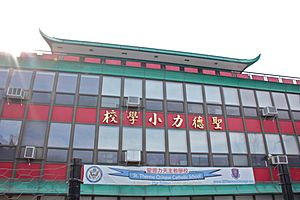 Haines, which had its current facility built in 1994, serves students from Chinatown and formerly from the Harold L. Ickes Homes; students from the latter used a tunnel to get to school. As of 2001[update] 70% of the students were Asian while 28% were black; most residents of Ickes were black. Connie Laureman of the Chicago Tribune stated that Haines, in 1990, was "crowded and dilapidated". Until Gandy Easton became principal in 1990, the school had de facto racial segregation as ethnic Chinese students stayed in a bilingual program while black students took regular classes. Easton combined the two levels together, despite protests from ethnic Chinese parents. By 2001 school authorities instituted programs to combat racism and ensure Chinese and black students socialized with one another.

The Roman Catholic Archdiocese of Chicago supports the St. Therese Chinese Catholic School (traditional Chinese: 聖德力天主教學校; simplified Chinese: 圣德力天主教学校; pinyin: Shèng Délì Tiānzhǔ​jiào Xuéxiào), a K-8 private Catholic school, which has one of its two campuses in Chinatown. It was established in 1941. In 1990, almost all of the students were ethnic Chinese. 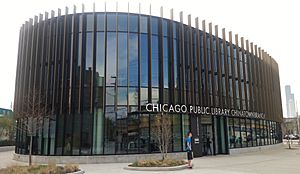 All content from Kiddle encyclopedia articles (including the article images and facts) can be freely used under Attribution-ShareAlike license, unless stated otherwise. Cite this article:
Chinatown, Chicago Facts for Kids. Kiddle Encyclopedia.