National Day of the People's Republic of China facts for kids 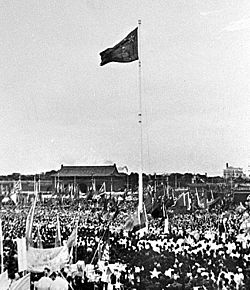 The first raising of the Chinese national flag at the celebration of the beginning of the People's Republic of China on October 1, 1949

National Day is a yearly holiday in the People's Republic of China. It celebrates the beginning of its new government on October 1, 1949. It is one of two Golden Weeks in the country, along with the Chinese New Year.

The Mandarin Chinese name of the holiday is Guóqìng Jié, which means "Nation-Celebrating Holiday" or "Holiday of National Celebration". It is written 國慶節 in traditional characters and 国庆节 in simplified characters. The holiday has also become a common given name in China, with around 420,000 people named "Guoqing" in 2010.

Mao Zedong speaking about the beginning of the People's Republic of China from atop the Forbidden City's Gate of Heavenly Peace (Tian'anmen) on October 1, 1949

People carry flags and photographs of Communist and national leaders on Oct. 1, 1952 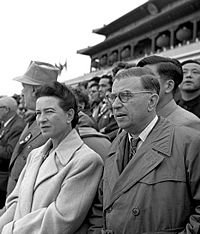 Foreign guests sometimes come to the celebrations, such as the French thinkers De Beauvoir and Sartre in 1955.

From at least the time of the Western Jin dynasty in the late 3rd century, After the Xinhai Revolution, the Republic of China celebrated its national day on October 10.

Near the end of the Chinese Civil War, Mao Zedong and the Chinese Communist Party began the People's Republic of China on September 21, 1949. This is sometimes known as "Chinese Independence Day". The PRC leaders and 300,000 Chinese celebrated the creation of the new government on October 1 in Tian'anmen Square. At the first meeting of the first CPPCC on Oct. 9, Xu Guangping introduced Ma Xulun's suggestion that China have a yearly national day celebrated apart from the birthday of the Communist Party. They recommended it be October 1, the day of Mao's public message. The Central People's Government passed their suggestion on December 2, making Oct. 1 a yearly holiday.

National Day was celebrated with military parades in Beijing every year from 1949 to 1959. By 1960, the problems during the Great Leap Forward caused the government to suggest saving money on celebrations. From 1960 to 1970, there were no military parades but the day was still celebrated with large gatherings in Tian'anmen Square. After the Ninth Congress, the big meetings in Beijing were discouraged in favor of smaller events at parks and other locations from 1971 to 1983. 1984 saw the first military parade in many years, celebrating the PRC's 35th anniversary. There was another large military parade at the 50th anniversary in 1999, and a third at the 60th anniversary in the year after the Beijing Olympics.

Since the year 2000, National Day has been one of the country's Golden Weeks: there are three days of paid time away from work from Oct. 1 to Oct. 3 and two weekends around it are moved to make a 7 day long holiday. These Golden Weeks copied a similar Japanese idea. The 2017 National Day was 8 days long, because it also included the Mid-Autumn Festival. 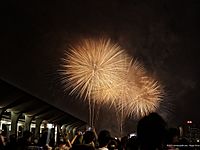 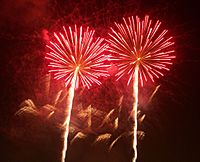 Fireworks at Shanghai's 2015 Music Fireworks Festival, which occurs over the whole week of the holiday

National Day begins with the raising of the national flag at Tian'anmen Square in Beijing.

The holiday is associated with large military parades in Beijing. The leaders of the Chinese Communist Party give speeches

Every year, many large groups of flowers are put along Beijing's Chang'an Avenue. The 2017 centerpiece measured 50 meters (160 ft) across its base and stood 17 meters (56 ft) high. Lan Hailang and dozens of other designers and officials made it from April to September, with at least 70 big design changes. The finished designs should show how China is getting better and what it plans to do next. Parts of the 2017 flower designs show the Belt-and-Road Initiative to make China's connections with Central Asia better; other parts show ways Beijing and Tianjin are going to be better over the next few years.

There are state dinners in Beijing

In the evening, fireworks are set off in Beijing, Hong Kong, and other large cities. There are also some singing, dancing, painting, and calligraphy celebrations. In Shanghai, the Tourism Festival's Music Fireworks Festival happens during the weeklong holiday. It is one of Asia's largest fireworks shows.

The long holiday also helps Chinese tourism, with millions of people traveling around the country visiting family members or sightseeing. This leads to higher prices and crowds, though, so foreign visitors are usually encouraged to come at other times of the year instead.

Unlike traditional Chinese holidays, National Day is not associated with any special food.

All content from Kiddle encyclopedia articles (including the article images and facts) can be freely used under Attribution-ShareAlike license, unless stated otherwise. Cite this article:
National Day of the People's Republic of China Facts for Kids. Kiddle Encyclopedia.