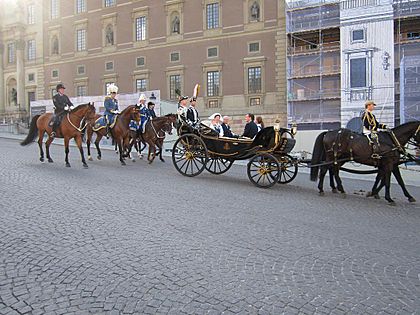 In monarchies (such as in Sweden, 6 June 2013) the head of state will often ride through the streets and greet citizens on National Day.

The National Day of a country is a special day where the people normally celebrate the country. It is usually a national holiday.

In most cases, National Day is the day the country became independent or a new government was put in place. Most countries only have one National Day per year, although some, like India and Pakistan have more than one. Denmark and the United Kingdom are among the very few countries that do not have a national day.

All content from Kiddle encyclopedia articles (including the article images and facts) can be freely used under Attribution-ShareAlike license, unless stated otherwise. Cite this article:
National Day Facts for Kids. Kiddle Encyclopedia.