KeyBank Center is a multipurpose indoor arena located in downtown Buffalo, New York. It is the largest indoor arena in Western New York seating 19,070 fans, and was constructed primarily for the Buffalo Sabres of the National Hockey League (NHL), who have called the arena home since 1996, when it replaced the now-demolished Memorial Auditorium. The arena was renamed as KeyBank Center starting with the 2016–2017 NHL season. It is owned by Erie County and operated by Pegula Sports and Entertainment (as Hockey Western New York, LLC). 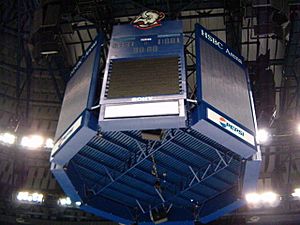 On November 16, 1996, the arena's first JumboTron, an eight-sided scoreboard made by Daktronics with Sony video screens, fell to the ice while it was being remotely moved. This was minutes after a few players ended practice and hours before a game between the Sabres and Boston Bruins. Nobody was injured, but the game was postponed. The scoreboard was replaced later that season.

In time for the Buffalo Sabres' 2007–2008 season, a new high-definition scoreboard manufactured by Daktronics was installed. In addition the four main speaker racks were removed and replaced and two additional speaker racks were added. The new scoreboard features four large high-definition video screens, surrounded by two 360-degree LED ribbon boards. The bottom of the board features large Buffalo Sabres logos with giant sabres crossed behind them. The handles of the sabres are lit with blue LEDs. The Sabres logos shoot smoke out of the Buffalo's nostrils every time a Sabres goal is scored or when the Sabres win at home. 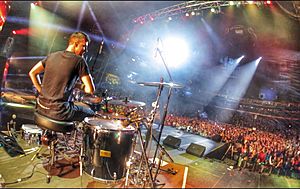 Concert at the center

The arena is also a regular stop for major concert tours and is the largest regular concert venue in Buffalo proper. In March 2015, the arena hosted country music legend Garth Brooks for a 4-night, 6 show, sold out string of shows, bringing over 100,000 people to Downtown Buffalo. It is a regular stop on Trans-Siberian Orchestra's annual circuit.

For 2016, the arena hosted multiple concerts including Kanye West, Blake Shelton, Rihanna, Carrie Underwood, Justin Bieber, Demi Lovato with Nick Jonas and Maroon 5 and AC/DC. A live recording of Bruce Springsteen and the E Street Band's performance at the arena in 2009 was released in 2016.

In 2017 Ariana Grande performed at the arena. Country music power couple Tim McGraw and Faith Hill bought their Soul2Soul The World Tour 2017 to Key Bank Center also in 2017. Celine Dion will return on December 5, 2019 for her Courage World Tour.

In its ice hockey/indoor lacrosse configuration, the KeyBank Center can seat 19,070 spectators. In the event that the arena is being used for a concert, basketball game or other event the total number can increase, accounting for seats or standing space on the arena's floor. Both sporting events and concerts at the arena are served by the Special Events station of the Buffalo Metro Rail.

All content from Kiddle encyclopedia articles (including the article images and facts) can be freely used under Attribution-ShareAlike license, unless stated otherwise. Cite this article:
KeyBank Center Facts for Kids. Kiddle Encyclopedia.