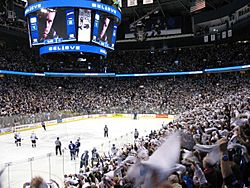 The arena during a Canucks 2007 playoffs game

Rogers Arena is a sports arena in Vancouver, British Columbia. The arena opened on September 21, 1995, and is the current home to the Vancouver Canucks of the National Hockey League.

The arena was first known as General Motors Place from 1995 to 2010. It was renamed Canada Hockey Place for a short time and held ice hockey events during the 2010 Winter Olympics. The arena used to be the home of the Vancouver Grizzlies from 1995 to 2001 before they moved to Memphis, Tennessee to become the Memphis Grizzlies.

Rogers Communications has naming rights for the arena right now. The arena has hosted the WWF's PPV In Your House 9: International Incident in 1996, ice hockey events during the 2010 Winter Olympics and UFC's 115 and 131.

All content from Kiddle encyclopedia articles (including the article images and facts) can be freely used under Attribution-ShareAlike license, unless stated otherwise. Cite this article:
Rogers Arena Facts for Kids. Kiddle Encyclopedia.