Income tax in the United States facts for kids

Income taxes are based on what a person earns in one calendar year – between January 1 and December 31.

Every year, the government divides incomes into categories. These categories are called tax brackets. Each tax bracket includes a range of incomes – the lowest and highest amounts a person could earn to be in that tax bracket.

Tax brackets are important because each one is taxed at a different tax rate. In other words, a person in a higher income category has to pay a larger percentage of their income in taxes. The tax rates for each different tax bracket are called marginal tax rates.

For example, in 2016, these are the tax brackets and marginal tax rates for single people:

Not all income is taxed at the same rate

However, this does not mean that a person making $415,051 is paying 39.6% of that entire $415,051 in income taxes. Tax rates in the United States are marginal. This means that different portions of a person's income get taxed at different rates.

In other words, what the chart above really means is that in 2016, for a single person:

Not all income is taxable

However, there are some types of income that the government cannot take as part of income taxes.

There are many kinds of deductions. There are some deductions that anyone who pays taxes can take. For example, if a person has paid to move, paid into a retirement fund, or paid student loan interest, they can take these costs off their gross income. The government will not tax these costs.

Sometimes people have other deductions that will add up to more than the standard deduction. These can also be used to decrease the amount of income the government can tax a person on.

The federal government allows each person who files taxes to take a tax deduction called a "personal exemption." When the United States Congress created tax rules in 1954, they thought a certain amount of money should not be taxed so that a person could spend that money on food, housing, and other basic needs. In 2015, the personal exemption for one person was $4,000. Most people can take another exemption for their spouse, and another for each child in their home.

Many states have their own deductions. For example, if a person in Massachusetts pays rent to a landlord, they can deduct half of their rent (up to $3,000) from the amount of income the government can tax them on.

The federal government also offers tax credits. This means that if a person spends money on certain things, and meets all the rules of the credit program, the government will give them back every dollar they spent. For example, the Child and Dependent Care Credit is for parents who work, but have to pay over $3,000 a year for someone to take care of their children while they are working. Each credit has many different rules that people must meet. However, if they do meet them, the federal government will take $3,000 off of their taxes, to help the parents continue to work.

Every year, most people in the United States must file a report of their income from the year, their deductions, credits, and any other special tax issues. This report is called a tax return. The tax return helps work out what a person might owe the government in taxes. On the other hand, if a person has been paying their taxes bit by bit, the government may owe them money. This is called a tax refund.

Usually, all tax returns are due by April 15. However, because of holidays in Washington, D.C., sometimes "Tax Day" comes a few days later.

There are a five different ways that a person, or a couple, can file their tax returns:

Sometimes a person fits into more than one of these categories. If this happens, they are allowed to file their taxes using the category that will let them pay the least amount of taxes.

Filing status is important because many things change based on what filing status a person files their taxes under. For example:

Example of a tax calculation

Here is a basic example of how a person would work out what they have to pay in taxes, based on their income, filing status, and deductions.

This person is paying only 4.9% of their gross (total) income to the government in income taxes.

What federal income taxes pay for

According to the White House, in 2014, the United States government spent people's federal income taxes on these things:

What state and local income taxes pay for

Every state gets to decide where to spend the income tax it collects (its income tax revenue). Different states use this money for different things, at different times.

In 2015, a report looked at what every state spent its income tax revenue on. It found that most of state income tax dollars went to pay for education and health care.

Specifically, states spent over half of their income tax revenues on three different things: 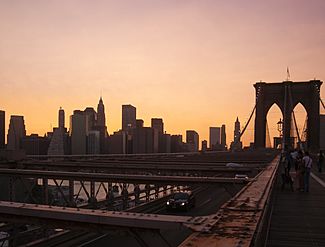 The 2015 report found that the states spent the other half of their income tax revenues on many different things. Here are some examples.

Transportation makes up about 5% of the states' spending. Income taxes pay for many things, like:

States spend about 4% of their income tax revenue on corrections. These income taxes pay for things like: 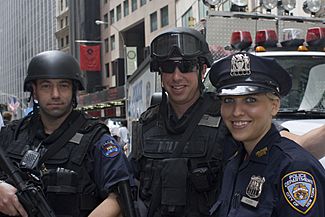 Police are often paid by state or local income taxes

Many states also use income tax revenues to pay for important "public services," like:

All content from Kiddle encyclopedia articles (including the article images and facts) can be freely used under Attribution-ShareAlike license, unless stated otherwise. Cite this article:
Income tax in the United States Facts for Kids. Kiddle Encyclopedia.