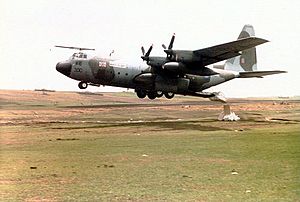 Humanitarian aid is aid given with respect of human dignity with a spirit of human nature to people in war, disaster including natural disaster and to refugees according to laws of war and international human rights law. To this end International Red Cross and Red Crescent Movement and Office for the Coordination of Humanitarian Affairs exist.

All content from Kiddle encyclopedia articles (including the article images and facts) can be freely used under Attribution-ShareAlike license, unless stated otherwise. Cite this article:
Humanitarian aid Facts for Kids. Kiddle Encyclopedia.