Laws of war facts for kids 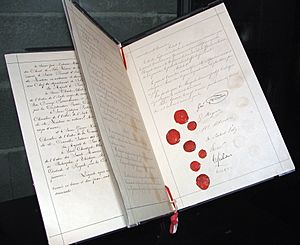 The First Geneva Convention governing the sick and wounded members of armed forces was signed in 1864.

The Laws of war are some simple rules which most people accept about fighting. Many people think that because there is fighting, there should be no rules. This is called "total war". However, laws of war have been made so that wars do not get worse than they need to be.

Where the laws come from 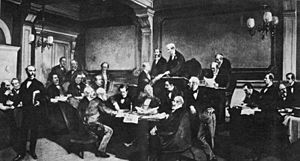 The signing of the First Geneva Convention by some of the major European powers in 1864.

These laws come from various treaties. Some of these treaties are:

All content from Kiddle encyclopedia articles (including the article images and facts) can be freely used under Attribution-ShareAlike license, unless stated otherwise. Cite this article:
Laws of war Facts for Kids. Kiddle Encyclopedia.