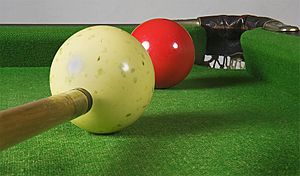 A collision occurs when two objects come in contact with each other. All collisions have the same momentum before and after a collision. Examples of collisions include car crashes, bouncing a ball, and playing pool. Collisions are made from two smaller sections called elastic and inelastic collisions.

Deflection happens when an object hits a plane surface. If the kinetic energy after impact is the same as before impact, it is an elastic collision. If kinetic energy is lost, it is an inelastic collision. It is not possible to determine from the diagram whether the illustrated collision was elastic or inelastic, because no velocities are provided. The most one can say is that the collision was not perfectly inelastic, because in that case the ball would have stuck to the wall

In the case of a two dimensional collision, the rules in elastic and inelastic collision are still the same, but vectors are used to find the momentum before or after a collision.

All content from Kiddle encyclopedia articles (including the article images and facts) can be freely used under Attribution-ShareAlike license, unless stated otherwise. Cite this article:
Collision Facts for Kids. Kiddle Encyclopedia.