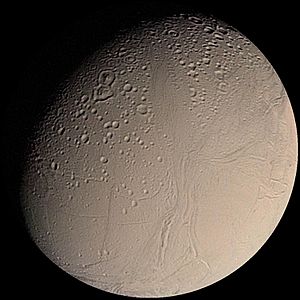 A picture of Enceladus that was taken by Voyager 1.

Enceladus is a moon of Saturn. It is the sixth largest of Saturn's moons, and it has a diameter of 500 km. Enceladus is within Saturn's E ring and likely contributes material to it. The moon is made mostly out of water ice, so it reflects light very well. It reflects almost 100% of the sunlight that strikes the moon.William Herschel discovered Enceladus on August 28, 1789. In 2014, NASA reported that its Cassini spacecraft found evidence for liquid water on Enceladus. Scientists now think that there is a large underground ocean of liquid water, around 10 km thick, near Enceladus' south pole. There are also cryovolcanoes (cold volcanoes) near the south pole. These volcanoes shoot large jets of water vapor, other volatiles, and some solid particles like sodium chloride crystals and ice particles into space. Some of these substances become part of Saturn's E ring.

All content from Kiddle encyclopedia articles (including the article images and facts) can be freely used under Attribution-ShareAlike license, unless stated otherwise. Cite this article:
Enceladus (moon) Facts for Kids. Kiddle Encyclopedia.