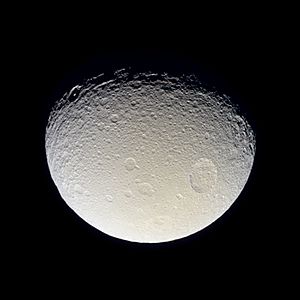 Tethys (pronounced TEE-this) is a large moon of the planet Saturn.

It was discovered by Giovanni Domenico Cassini in 1684. It was one of the first Saturnian moons discovered.

It has a very large crater on its surface, called Odysseus. It is named after a Greek warrior king in Homer's two great works, The Iliad and The Odyssey. There is also a very long valley called Ithaca Chasma. It is 100 km wide and 2000 km long.

Tethys takes 45.3 hours to orbit (go around) Saturn and orbits Saturn 294,660 km away. Tethys is tidally locked in phase with its parent planet - one side always faces toward Saturn.

All content from Kiddle encyclopedia articles (including the article images and facts) can be freely used under Attribution-ShareAlike license, unless stated otherwise. Cite this article:
Tethys (moon) Facts for Kids. Kiddle Encyclopedia.