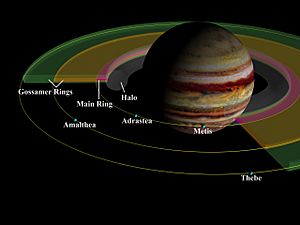 A ring system is a ring made of dust and other particles orbiting around a planet in a flat-disc shaped region. The gas giants Jupiter, Saturn, Uranus and Neptune are the only planets known to have rings, with the rings of Saturn being the most spectacular system of rings.

The rings sometimes have "shepherd satellites". These moons orbit either in between ring gaps or the outside edge of a ring. The moons' gravity maintain the rings current shape with a well defined edge. Any material that drifts closer to a Moon's orbit, it can either move back into the body of the ring, deflect out into space, or is added onto the Moon's surface.

The rings can be made of silica or water ice. It is not known how any of the rings were formed. They are usually inside the Roche limit where large satellites cannot form. 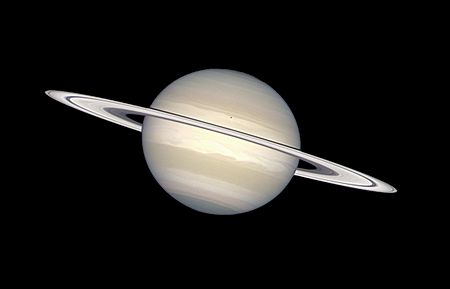 The ring swirling around Saturn consists of chunks of ice and dust. The little dark spot on Saturn is the shadow from Saturn's moon Enceladus.

Fainter planetary rings can form as a result of meteoroid impacts with moons orbiting around the planet or, in case of Saturn's E-ring, the ejecta of cryovolcanic material.

The composition of ring particles varies; they may be silicate or icy dust. Larger rocks and boulders may also be present, and in 2007 tidal effects from eight 'moonlets' only a few hundred meters across were detected within Saturn's rings. The maximum size of a ring particle is determined by the specific strength of the material it is made of, its density, and the tidal force at its altitude. The tidal force is proportional to the average density inside the radius of the ring, or to the mass of the planet divided by the radius of the ring cubed. It is also inversely proportional to the square of the orbital period of the ring.

Sometimes rings will have "shepherd" moons, small moons that orbit near the inner or outer edges of rings or within gaps in the rings. The gravity of shepherd moons serves to maintain a sharply defined edge to the ring; material that drifts closer to the shepherd moon's orbit is either deflected back into the body of the ring, ejected from the system, or accreted onto the moon itself.

It is also predicted that Phobos, a moon of Mars, will break up and form into a planetary ring in about 50 million years. Its low orbit, with an orbital period that is shorter than a Martian day, is decaying due to tidal deceleration.

Jupiter's ring system was the third to be discovered, when it was first observed by the Voyager 1 probe in 1979, and was observed more thoroughly by the Galileo orbiter in the 1990s. Its four main parts are a faint thick torus known as the "halo"; a thin, relatively bright main ring; and two wide, faint "gossamer rings". The system consists mostly of dust.

Saturn's rings are the most extensive ring system of any planet in the Solar System, and thus have been known to exist for quite some time. Galileo Galilei first observed them in 1610, but they were not accurately described as a disk around Saturn until Christiaan Huygens did so in 1655. With help from the NASA/ESA/ASI Cassini mission, a further understanding of the ring formation and active movement was understood. The rings are not a series of tiny ringlets as many think, but are more of a disk with varying density. They consist mostly of water ice and trace amounts of rock, and the particles range in size from micrometers to meters.

Uranus' ring system lies between the level of complexity of Saturn's vast system and the simpler systems around Jupiter and Neptune. They were discovered in 1977 by James L. Elliot, Edward W. Dunham, and Jessica Mink. In the time between then and 2005, observations by Voyager 2 and the Hubble Space Telescope led to a total of 13 distinct rings being identified, most of which are opaque and only a few kilometers wide. They are dark and likely consist of water ice and some radiation-processed organics. The relative lack of dust is due to aerodynamic drag from the extended exosphere-corona of Uranus.

The system around Neptune consists of five principal rings that, at their densest, are comparable to the low-density regions of Saturn's rings. However, they are faint and dusty, much more similar in structure to those of Jupiter. The very dark material that makes up the rings is likely organics processed by radiation, like in the rings of Uranus. 20 to 70 percent of the rings are dust, a relatively high proportion. Hints of the rings were seen for decades prior to their conclusive discovery by Voyager 2 in 1989.

A Cassini mosaic of Saturn's rings. 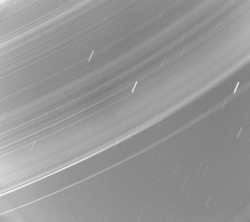 A Voyager 2 image of Uranus's rings. 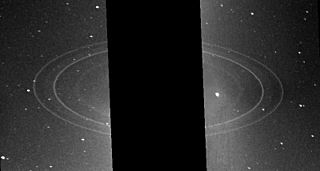 A pair of Voyager 2 images of Neptune's rings.

All content from Kiddle encyclopedia articles (including the article images and facts) can be freely used under Attribution-ShareAlike license, unless stated otherwise. Cite this article:
Ring system Facts for Kids. Kiddle Encyclopedia.