Rings of Jupiter facts for kids 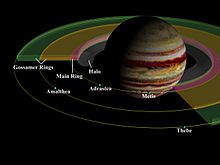 The Rings of Jupiter are a number of rings which circle the planet Jupiter. It was the third set of rings found in the Solar System after the rings found around Saturn and Uranus. The rings are very difficult to see from Earth, needing the most powerful telescopes. They were not discovered until the Voyager 1 space probe visited the planet in 1979. The Galileo space probe carried out more studies in the 1990s. The Hubble Space Telescope and large Earth telescopes have provided information recently.

The ring system is faint and is made mainly of dust. It has four main parts: a thick inner ring known as the "halo" ring, a bright but very thin "main" ring, and two outer, wide, faint "gossamer" rings. These gossamer rings are made from dust from the moons Amalthea and Thebe and have been name after them. They are known as gossamer rings because they are transparent, or "see through".

All content from Kiddle encyclopedia articles (including the article images and facts) can be freely used under Attribution-ShareAlike license, unless stated otherwise. Cite this article:
Rings of Jupiter Facts for Kids. Kiddle Encyclopedia.