Amalthea is the third closest moon to Jupiter. It was found on September 9, 1892, by Edward Emerson Barnard and named after Amalthea, a nymph in Greek mythology. It is also known as Jupiter V.

On Amalthea, Jupiter would be an amazing sight in its sky, looking 92 times bigger than the Full Moon. Amalthea is the biggest of the closer moons of Jupiter. Non-spherical and reddish in colour, it is thought to have of water ice with unknown amounts of other materials. Its surface has big craters and high mountains.

Amalthea was found on September 9, 1892 by Edward Emerson Barnard using the 36 inch (91 cm) telescope at Lick Observatory. It was the first new moon of Jupiter since Galileo Galilei's discovery of the Galilean moons in 1610.

The moon is named after the nymph Amalthea from Greek mythology who nursed the infant Zeus (the Greek equivalent of Jupiter) with goat's milk. Its Roman numeral designation is Jupiter V. The name "Amalthea" was not adopted by the IAU until 1975, although it had been in use for many decades. The name was suggested by Camille Flammarion. Before 1975, Amalthea was most commonly known simply as Jupiter V. The adjectival form of the name is Amalthean.

Amalthea circles Jupiter at a distance of 181,000 km (2.54 Jupiter radii). The orbit of Amalthea has an eccentricity of 0.003 and an inclination of 0.37° relative to the equator of Jupiter. 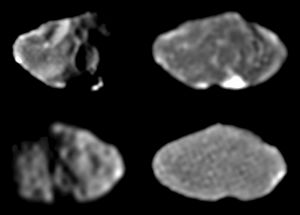 How Amalthea looks from Jupiter 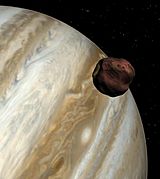 Computer simulation of Amalthea and Jupiter. The 'camera' is 1,000km from Amalthea and the field of view is 26°.

From Jupiter's surface —or rather, from just above its cloudtops— Amalthea would appear very bright, shining with a magnitude of −4.7, similar to that of Venus from Earth.

How Jupiter looks from Amalthea

From the surface of Amalthea, Jupiter would look enormous: it would look 92 times bigger than the Full Moon.

In 1979-1980, the Voyager 1 and 2 spacecraft made the first images of Amalthea, which resolved its surface. They also measured the moon's surface temperature. Later, the Galileo orbiter completed taking pictures of Amalthea's surface and a close flyby enabled it to constrain the moon's internal structure and composition.

All content from Kiddle encyclopedia articles (including the article images and facts) can be freely used under Attribution-ShareAlike license, unless stated otherwise. Cite this article:
Amalthea (moon) Facts for Kids. Kiddle Encyclopedia.