Phobos is the innermost and larger of the two natural satellites of Mars, the other being Deimos. Both moons were discovered in 1877 by American astronomer Asaph Hall while observing Mars at the U.S. Naval Observatory in Washington.

Phobos is a small, irregularly shaped object with a mean radius of 11 km (7 mi) and is seven times as massive as the outer moon, Deimos. Phobos is named after the Greek god Phobos, a son of Ares (Mars) and Aphrodite (Venus) and the personification of horror (phobia).

Phobos is actually quite tiny compared to most other moons in the Solar System. It is not a round sphere-like object, but irregularly shaped, more like a lumpy potato. At the largest extreme, it is 26 km across, and the smallest is about 18 km across. Basically about the size of a large city here on the Earth.

Phobos is one of the least reflective bodies in the Solar System. Surface temperatures range from about −4 °C (25 °F) on the sunlit side to −112 °C (−170 °F) on the shadowed side. The defining surface feature is the large impact crater, Stickney, which takes up a substantial proportion of the moon's surface. In November 2018, astronomers concluded that the many grooves on Phobos were caused by boulders ejected from the asteroid impact that created Stickney crater.

Orbits of Phobos and Deimos (to scale), as seen from above Mars

The orbital motion of Phobos has been intensively studied, making it "the best studied natural satellite in the Solar System" in terms of orbits completed. Its close orbit around Mars produces some unusual effects. Phobos orbits 6,000 km (3,700 mi) from the Martian surface, closer to its primary body than any other known planetary moon. It is so close that it orbits Mars much faster than Mars rotates, and completes an orbit in just 7 hours and 39 minutes. As a result, from the surface of Mars it appears to rise in the west, move across the sky in 4 hours and 15 minutes or less, and set in the east, twice each Martian day. A day on Phobos is about 7 hours 40 minutes. 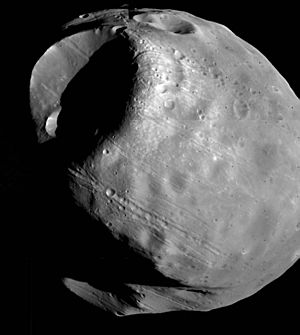 Geological features on Phobos are named after astronomers who studied Phobos and people and places from Jonathan Swift's Gulliver's Travels.

Infrared spectra shows that it has carbon-rich material found in carbonaceous chondrites, its composition shows similarities to that of Mars’ surface. Phobos's density is too low to be solid rock, and it is known to have significant porosity (full of tiny holes). These results led to the suggestion that Phobos might contain a substantial reservoir of ice. 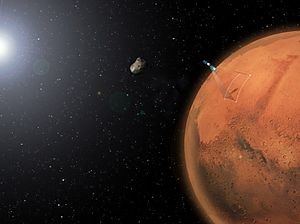 Phobos is heavily cratered. The most prominent of these is the crater, Stickney, (named after Asaph Hall's wife) a large impact crater some 9 km (5.6 mi) in diameter, taking up a substantial proportion of the moon's surface area. As with Mimas's crater Herschel, the impact that created Stickney must have nearly shattered Phobos.

Recent images from Mars Global Surveyor indicate that Phobos is covered with a layer of fine-grained regolith at least 100 meters thick; it is thought to have been created by impacts from other bodies, but it is not known how the material stuck to an object with almost no gravity. If you were standing on Phobos, Mars would be a significant feature in the sky, taking up almost 1/4 of the sky.

Phobos does not have an atmosphere due to its low mass and low gravity, and also no magnetic field. 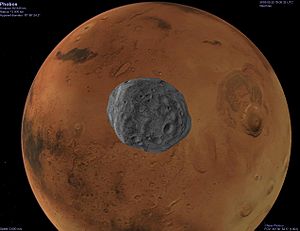 Phobos, because it is so small, has hardly any gravity at all. The gravity is only 1/1000th as strong as it is on the Earth. Phobos has dimensions of 27 km × 22 km × 18 km, and retains too little mass to be rounded under its own gravity. It has so little gravity that a person who weighs 68 kg (150 lb) on Earth would weigh about 60 g (2 oz) standing on the surface of Phobos. This also means that you would be able to lift massive amounts of mass. A person who could carry 10 kg on Earth would be able to carry three elephants on Phobos.

Phobos is trapped in tidal drag, with its orbit lowering roughly 1.8 meters per century. In about 50 million years, Phobos will reach the Roche limit (the distance within which the gravitational field of a large body is strong enough to prevent any smaller body from being held together by gravity), where it is likely to be torn apart. When Phobos is eventually torn apart by tidal forces, some of the debris will fall on Mars and a fraction of the debris will likely form a planetary ring around Mars, which may last from one million to one hundred million years. 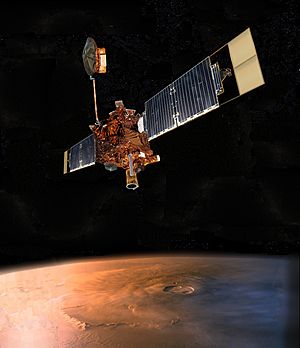 Phobos has been photographed close-up by several spacecraft whose primary mission has been to photograph Mars. The first was Mariner 7 in 1969, followed by Viking 1 in 1977, Mars Global Surveyor in 1998 and 2003, Mars Express in 2004, 2008, and 2010, and Mars Reconnaissance Orbiter in 2007 and 2008. On August 25, 2005, the Spirit rover, with an excess of energy due to wind blowing dust off of its solar panels, took several short-exposure photographs of the night sky from the surface of Mars, Phobos and Deimos are both clearly visible in the photograph.

The Soviet Union undertook the Phobos program with two probes, both launched successfully in July 1988. Phobos 1 was accidentally shut down by an inaccurate command from ground control issued in September 1988 and lost while the craft was still en route. 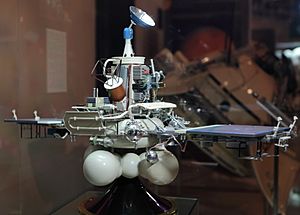 Model of the automatic interplanetary station Phobos. Phobos was designed to study Mars and its moon Phobos

Phobos 2 arrived at the Mars system in January 1989, after transmitting a small amount of data and imagery, but shortly before beginning its detailed examination of Phobos's surface, the probe abruptly ceased transmission due either to failure of the on-board computer or of the radio transmitter, already operating on the backup power. Other Mars missions collected more data, but the next dedicated mission attempt would be a sample return mission. 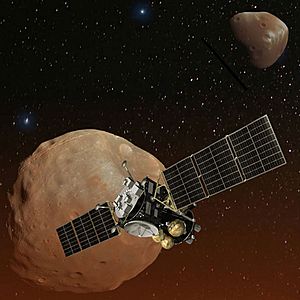 A second contributor to this mission was the China National Space Administration, which supplied a surveying satellite called "Yinghuo-1", which would have been released in the orbit of Mars, and a soil-grinding and sieving system for the scientific payload of the Phobos lander. However, after achieving Earth orbit, the Fobos–Grunt probe failed to initiate subsequent burns that would have sent it off to Mars. Attempts to recover the probe were unsuccessful and it crashed back to Earth in January 2012.

The Martian Moons Exploration (MMX) is a robotic space probe set for launch in 2024 to bring back the first samples from Mars' largest moon Phobos. Developed by the Japanese Aerospace Exploration Agency (JAXA) and announced in 9 June 2015, MMX will land and collect samples from Phobos once or twice, along with conducting Deimos flyby observations and monitoring Mars' climate.

The mission aims to provide key information to help determine whether the Martian moons are captured asteroids or the result of a larger body hitting Mars.

As part of a Human mission to Mars 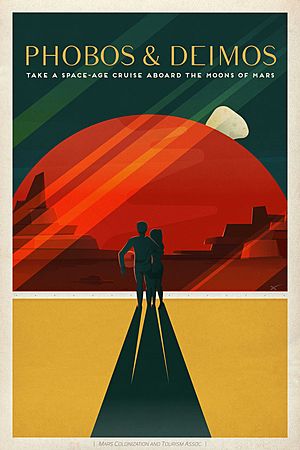 Because Phobos is so close to Mars, and because of the very low gravity, Phobos may be a place where people and supplies are transferred before going to the surface of Mars and then going to the Earth, almost like a space station in orbit around the Earth. It is very likely that if people go to Mars as astronauts, they will be visiting Phobos as well. Phobos also has frozen water that could be useful to astronauts on Mars as drinking water and for extracting oxygen to breathe.

Phobos has also been proposed as an early target for a manned mission to Mars because a landing on Phobos would be considerably less difficult and expensive than a landing on the surface of Mars itself. A lander bound for Mars would need to be capable of atmospheric entry and subsequent return to orbit, without any support facilities (a capacity that has never been attempted in a manned spacecraft); a lander intended for Phobos could be based on equipment designed for lunar and asteroid landings.

Additionally, for the delta-v to land on Phobos and return is only 80% of that for a trip to and from the surface of the Moon, partly due to Phobos's very weak gravity. The human exploration of Phobos could serve as a catalyst for the human exploration of Mars and be exciting and scientifically valuable in its own right.

All content from Kiddle encyclopedia articles (including the article images and facts) can be freely used under Attribution-ShareAlike license, unless stated otherwise. Cite this article:
Phobos (moon) Facts for Kids. Kiddle Encyclopedia.