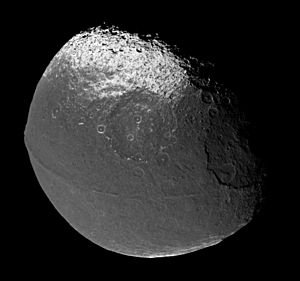 Iapetus is a large moon of Saturn. It was discovered by Giovanni Domenico Cassini in 1671.

Iapetus is unusual: one side is very bright and the other side is very dark. This is because one half of the moon is covered in ice and the other side is coated in black, dusty carbon deposits. When Cassini observed the moon, he could only see the moon on one side of Saturn. He concluded that the moon is darker on side than the other, and it was confirmed by the Voyager 1 spacecraft. Iapetus also has an equatorial ridge discovered by the Cassini-Huygens spacecraft on 31 December 2004. Iapetus has a slow rotation rate, taking 79 Earth days for a rotation.

All content from Kiddle encyclopedia articles (including the article images and facts) can be freely used under Attribution-ShareAlike license, unless stated otherwise. Cite this article:
Iapetus (moon) Facts for Kids. Kiddle Encyclopedia.