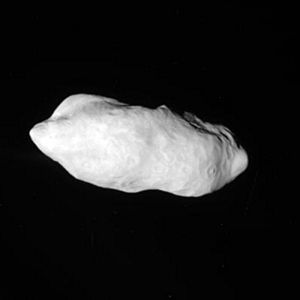 Prometheus is a moon of Saturn. It was discovered by Stewart Collins from Voyager 1 photos in 1981. It was named after the god of the same name in Greek mythology. The moon acts as a shepherd satellite for the inner part of Saturn's F ring.

All content from Kiddle encyclopedia articles (including the article images and facts) can be freely used under Attribution-ShareAlike license, unless stated otherwise. Cite this article:
Prometheus (moon) Facts for Kids. Kiddle Encyclopedia.