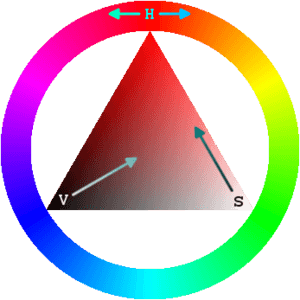 An HSV color wheel allows the user to quickly select a multitude of colors.

A color wheel is a circular chart that shows primary and secondary colors.

The tertiary colors are the same for both the printer's color wheel and the electronic color wheel.

The 12 major colors of the color wheel 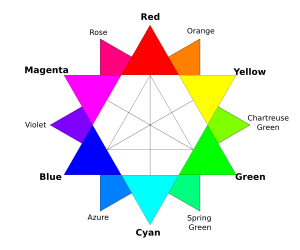 The RGB color wheel, in which the colors are displayed discretely rather than continuously as in the HSV color wheel above

Note: Red is shown twice so it can be compared to both orange and rose.

All content from Kiddle encyclopedia articles (including the article images and facts) can be freely used under Attribution-ShareAlike license, unless stated otherwise. Cite this article:
Color wheel Facts for Kids. Kiddle Encyclopedia.