Kids Encyclopedia Facts
Not to be confused with Clair de Lune. 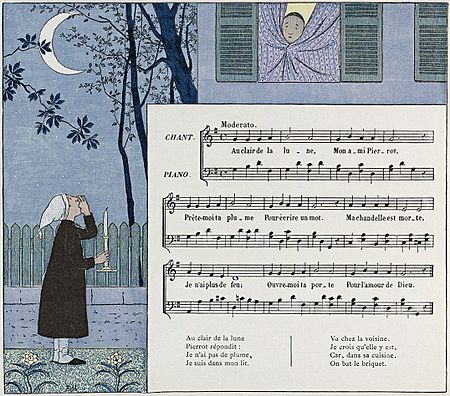 "Au clair de la lune" ( lit. "By the Light of the Moon") is a French folk song of the 18th century. Its composer and lyricist are unknown. Its simple melody is commonly taught to beginners learning an instrument.

Some sources report that "plume" (pen) was originally "lume" (an old word for "light" or "lamp").

19th-century French composer Camille Saint-Saëns quoted the first few notes of the tune in the section "The Fossils", part of his suite The Carnival of the Animals.

Erik Satie quoted this song in the section "Le flirt" (No. 19) of his 1914 piano collection Sports et divertissements.

In 1926, Samuel Barber rewrote "H-35: Au Claire de la Lune: A Modern Setting of an old folk tune" while studying at the Curtis Institute of Music.

In 1964, French pop singer France Gall recorded a version of this song, with altered lyrics to make it a love song.

In 2008, a phonautograph paper recording made by Édouard-Léon Scott de Martinville of "Au clair de la lune" on 9 April 1860, was digitally converted to sound by American researchers. This one-line excerpt of the song was widely reported to have been the earliest recognizable record of the human voice and the earliest recognizable record of music. According to those researchers, the phonautograph recording contains the beginning of the song, "Au clair de la lune, mon ami Pierrot, prête moi".

In 2008, composer Fred Momotenko composed "Au clair de la lune" as an artistic journey back in time to rediscover the original recording made on 9 April 1860. It is a composition for 4-part vocal ensemble and surround audio, performed during Gaudeamus Foundation music festival at Muziekgebouw aan 't IJ. It is the second Prize winner of the Linux "150-Years-of-Music-Technology Composition Competition Prize" and the special Prize winner of Festival EmuFest in Rome.

In the 1804 painting and sculpting exposition, Pierre-Auguste Vafflard presented a painting depicting Edward Young burying his daughter by night. An anonymous critic commented on the monochromatic nature of that painting with the lyrics: 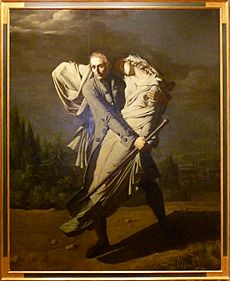 The "Story of my Friend Peterkin and the Moon" in The Ladies Pocket Magazine (1835) mentions the song several times and ends:

Indeed, what must have been the chagrin and despair of this same Jaurat, when he heard sung every night by all the little boys of Paris, that song of "Au clair de la lune", every verse of which was a remembrance of happiness to Cresson, and a reproach of cruelty to friend Peterkin, who would not open his door to his neighbor, when he requested this slight service.

In my earliest recollections of her, my mother is sitting in the lamplight, in a Windsor rocking chair, in front of the parlor stove. She is holding my brother on her lap. It is bed time and, in a thin sweet voice, she is singing him into drowsiness. I am on the floor, as usual among the chair legs, and I crawl behind my mother's chair because I do not like the song she is singing and do not want her to see what it does to me. She sings: "Au clair de la lune; Mon ami, Pierrot; Prête-moi ta plume; Pour écrire un mot."

Then the vowels darken ominously. My mother's voice deepens dramatically, as if she were singing in a theater. This was the part of the song I disliked most, not only because I knew that it was sad, but because my mother was deliberately (and rather unfairly, I thought) making it sadder: "Ma chandelle est morte; Je n'ai plus de feu; Ouvre-moi la porte; Pour l'amour de Dieu."

I knew, from an earlier explanation, that the song was about somebody (a little girl, I thought) who was cold because her candle and fire had gone out. She went to somebody else (a little boy, I thought) and asked him to help her for God's sake. He said no. It seemed a perfectly pointless cruelty to me.

In their 1957 play Bad Seed: A Play in Two Acts, Maxwell Anderson and William March write: "A few days later, in the same apartment. The living-room is empty: Rhoda can be seen practicing 'Au Clair de la Lune' on the piano in the den."

All content from Kiddle encyclopedia articles (including the article images and facts) can be freely used under Attribution-ShareAlike license, unless stated otherwise. Cite this article:
Au clair de la lune Facts for Kids. Kiddle Encyclopedia.