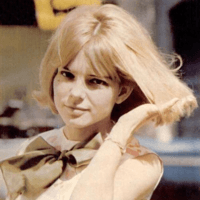 Gall was known for her songs "Laisse tomber les filles", "Poupée de cire, poupée de son", and "Ella, elle l'a". She was a Eurovision Song Contest winner for the 1965 contest. Gall was married to Michel Berger, until his death.

Gall died of an infection complicated from cancer of unknown primary origin at a Paris hospital in Neuilly-sur-Seine on 7 January 2018 at the age of 70.

All content from Kiddle encyclopedia articles (including the article images and facts) can be freely used under Attribution-ShareAlike license, unless stated otherwise. Cite this article:
France Gall Facts for Kids. Kiddle Encyclopedia.