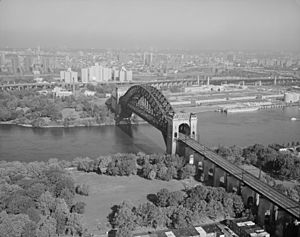 Hell Gate Bridge with Queens in the foreground 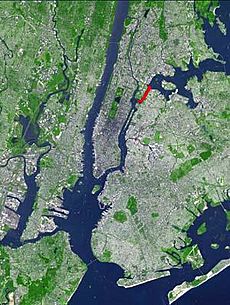 Hell Gate, shown in red, in a satellite photo of New York Harbor. It separates Wards Island to the west and Astoria, Queens to the east. 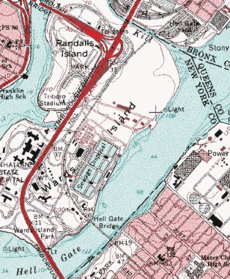 Hell Gate is a narrow tidal strait in the East River in New York City. It separates Astoria, Queens from Randall's and Wards Islands.

The name "Hell Gate" is a corruption of the Dutch phrase Hellegat (it first appeared on a Dutch map as Helle Gadt), which could mean either "bright strait" or "clear opening", and it was originally applied to the entirety of the East River. Dutch explorer Adriaen Block, the first European known to have navigated the strait, described it in his journals during his 1614 voyage aboard the Onrust. Hellegat is a fairly common toponym for waterways in the Low Countries, with at least 20 separate examples. Because explorers found navigation hazardous in this New World place of rocks and converging tide-driven currents (from the Long Island Sound, Harlem River strait, Upper Bay of New York Harbor, and lesser channels, some of which have been filled), the Anglicization stuck.

In October 1776, Admiral Howe sailed some of the British fleet through the strait, an action which was considered reckless at the time.

In 1851, the U.S. Army Corps of Engineers began to clear obstacles from the strait with explosives; the process would last 70 years. On September 24, 1876, the Corps used 50,000 pounds (23,000 kg) of explosives to blast the dangerous rocks, which was followed by further blasting work. On October 10, 1885, the Corps carried out the largest explosion in this process, annihilating Flood Rock with 300,000 pounds (140,000 kg) of explosives. The blast was felt as far away as Princeton, New Jersey and sent a geyser of water 250 feet (76 m) in the air. The blast has been described as "the largest planned explosion before testing began for the atomic bomb", although the detonation at the Battle of Messines in 1917 was larger. Rubble from the detonation was used in 1890 to fill the gap between Great Mill Rock and Little Mill Rock, merging the two islands into a single island, Mill Rock. The incident inspired the climactic conclusion of Bram Stoker's novel The Lair of the White Worm. 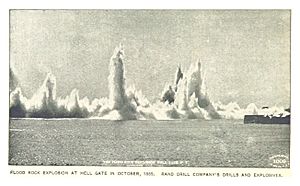 By the late 19th century, hundreds of ships, including HMS Hussar, had sunk in the strait. It was spanned in 1917 by the New York Connecting Railroad Bridge (now called the Hell Gate Bridge), which connects Wards Island and Queens. The bridge provides a direct rail link between New England and New York City. In 1936, it was spanned by the Triborough Bridge (officially Robert F. Kennedy Bridge since 2008), allowing vehicular traffic to pass among Manhattan, the Bronx, and Queens.

All content from Kiddle encyclopedia articles (including the article images and facts) can be freely used under Attribution-ShareAlike license, unless stated otherwise. Cite this article:
Hell Gate Facts for Kids. Kiddle Encyclopedia.