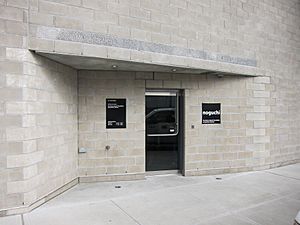 The Noguchi Museum, in Queens, New York, chartered as The Isamu Noguchi Foundation and Garden Museum, was designed and created by the Japanese-American sculptor Isamu Noguchi. Opening on a limited basis to the public in 1985 the purpose of the museum and foundation was and remains to preserve and display Noguchi's sculptures, architectural models, stage designs, drawings, and furniture designs. The two-story, 24,000 square feet (2,200 m2) museum and adjacent sculpture garden, located in Long Island City section of Queens, one block from the Socrates Sculpture Park, underwent major renovations in 2004 allowing the museum to stay open year-round.

To house the museum, in 1974 Noguchi purchased a photogravure plant and gas station located across the street from his New York studio, where he had worked and lived since 1961. The Isamu Noguchi Garden Museum opened to the public in 1985 on a seasonal basis.

In 1999, the Foundation Board approved a $13.5 million capital master plan to address structural concerns, ADA and NYC Building Code compliance and create a new public education facility. During renovation, the Museum relocated to a temporary space in Sunnyside, Queens, and held several thematic exhibitions of Noguchi's work. In February 2004, the museum was formally chartered as a museum, and granted 501(c)(3) public charity status. The Noguchi Museum reopened to the public at its newly renovated space in June 2004. The museum building continued to suffer from structural issues into the early 2000s and a second $8 million stabilization project was begun in September 2008.

There are 12 galleries and a gift shop within the museum.

Until March 26, 2008, a 60-foot (18 m)-tall 75-year-old Tree of Heaven (Ailanthus altissima) was a prominent centerpiece of the sculpture garden at the museum. The tree was spared by Noguchi when in 1975 he bought the building which would become the museum and cleaned up its back lot. "[I]n a sense, the sculpture garden was designed around the tree", said a former aide to Noguchi, Bonnie Rychlak, who later became the museum curator. By early 2008, the tree was found to be dying and threatened to crash into the building, which was about to undergo an $8.2 million renovation. The museum hired the Detroit Tree of Heaven Woodshop, an artists' collective, to use the wood to make benches, sculptures and other amenities in and around the building.

The Museum celebrated the 25th anniversary of its opening with the exhibition On Becoming an Artist. Isamu Noguchi and His Contemporaries, 1922 - 1960, which showed from November 17, 2010 to April 24, 2011

The New York State Council on the Arts has recognized the Museum's educational program, Art for Families, as a stellar example of a community outreach program, and Art for Tots as a “superb approach” in making young children comfortable in a museum setting.

All content from Kiddle encyclopedia articles (including the article images and facts) can be freely used under Attribution-ShareAlike license, unless stated otherwise. Cite this article:
Noguchi Museum Facts for Kids. Kiddle Encyclopedia.