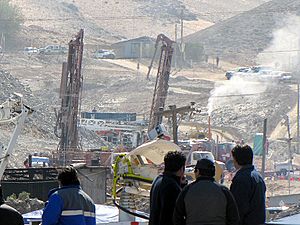 The 2010 Copiapó mining accident was a mining accident that happened on August 5, 2010, when the copper-gold mine of San José, near Copiapó, Chile, collapsed. It left 33 miners trapped around 700 meters under the ground.

The Mine of San José (Mina San José) is about 45 kilometres (28 mi) north of Copiapó, in the Region of Atacama. The miners were trapped at about 700 metres (2,300 ft) deep and about 5 kilometres (3 mi) from the entrance of the mine. The mine has had accidents in the past, including one death. A report from the Chilean Government from July 2010, said that the owners of the mine did not "reinforce the roof." The lack of reinforcement "led to an earlier collapse of the roof". There has been controversy over why the mine was not closed down earlier.

Some people, including lawyers representing the mining company, think that the owners of the mine will declare bankruptcy after the miners are rescued.

On October 13, 2010, Florencio Ávalos reached the surface. He was the first miner to be rescued.

All content from Kiddle encyclopedia articles (including the article images and facts) can be freely used under Attribution-ShareAlike license, unless stated otherwise. Cite this article:
2010 Copiapó mining accident Facts for Kids. Kiddle Encyclopedia.