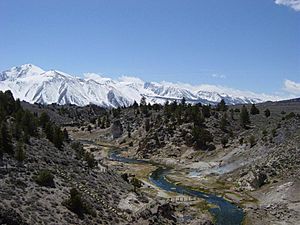 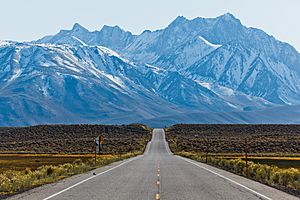 The Sherwin Range is a mountain range that is a sub-range of the Sierra Nevada system, in Mono County, eastern California. The range is also known locally as The Sherwins.

The range is named after Jim Sherwin, a prospector who operated the first toll road across the Sierra. Its eastern terminus was at Mammoth Lakes.

The Sherwin Range is within Inyo National Forest. It is well known for hiking opportunities in the summer, and backcountry skiing in the winter.

The range largely consists of reddish metamorphic rock, which are the roof pendant for the Sierra Nevada. This rock was formed in the Paleozoic Era, and then was subsequently recrystallized and warped by the intrusion of the Sierra Nevada batholith underneath it.

All content from Kiddle encyclopedia articles (including the article images and facts) can be freely used under Attribution-ShareAlike license, unless stated otherwise. Cite this article:
Sherwin Range Facts for Kids. Kiddle Encyclopedia.