Swall Meadows is a census-designated place in southern Mono County, California. The community is residential, including second homes and a volunteer fire department, but no commercial development. Geographically, it sits partway up the Sherwin Grade below the Wheeler Crest of the eastern Sierra Nevada mountains, at an elevation range of approximately 6,000 to 7,000 feet (1,800 to 2,100 m). It is in pinon-juniper/subalpine zone habitat, with views south along the Sierra Crest, of Mt. Tom, and east across Owens Valley to the White Mountains toward Nevada (image, below). It is accessed from "old 395", or Lower Rock Creek Rd. Swall Meadows is located approximately 20 miles (32 km) north of Bishop and 25 miles (40 km) south of Mammoth Lakes (by highway distance). It is also well known in the area as an important deer migration route for the Round Valley Mule Deer population, which cherish the grazing in the meadow and apple falls from the old orchard trees. ZIP Code is 93514. The community is inside area code 760. The population was 220 as of the 2010 census. 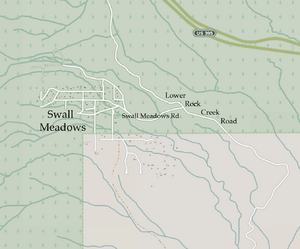 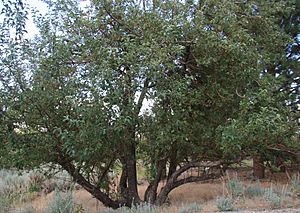 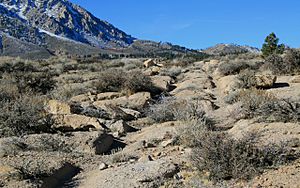 According to the United States Census Bureau, the CDP covers an area of 4.5 square miles (11.6 km²), all of it land. At the high, northwestern end is the old Sky Meadows Ranch, then houses and firehouse near the meadow, and at the southeast end a development known as Pinyon Ranch.

In addition to the predominant pinyon-juniper-sagebrush habitat, there are permanent and seasonal streams and the eponymous meadow with wetter-habitat vegetation such as Jeffrey pines, willows, stream and bog orchids, and the remnant trees of the old commercial apple orchard. In 2011 the Eastern Sierra Land Trust secured a conservation easement to protect 104 acres of the Swall Meadows meadow area (location of the historic homesite), for the continued benefit of the migrating mule deer. A number of other conservation easements have been completed in Swall Meadows since the ESLT organization was founded in 2001.

Between Paradise and Swall Meadows the old wagon road can be seen (image, left) that climbed about 3,000 ft (910 m) up the Sherwin Grade from Owens Valley toward Crowley Lake. 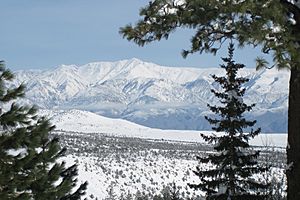 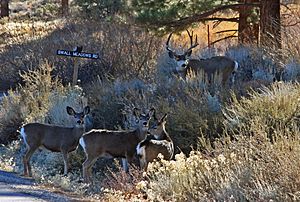 On February 6, 2015, Swall Meadows and the neighboring community of Paradise were ravaged by the Round Fire, which burned 7,000 acres. The fire destroyed 40 homes: 39 homes in Swall Meadows and 1 home in Paradise.

All content from Kiddle encyclopedia articles (including the article images and facts) can be freely used under Attribution-ShareAlike license, unless stated otherwise. Cite this article:
Swall Meadows, California Facts for Kids. Kiddle Encyclopedia.