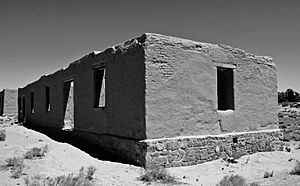 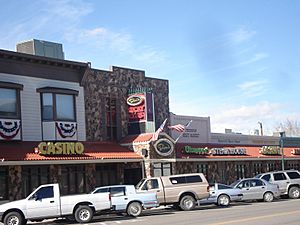 Lyon County is a county located in the U.S. state of Nevada. As of the 2010 census, the population was 51,980. Its county seat is Yerington.

Lyon County was one of the nine original counties created in 1861. It was named after Nathaniel Lyon, the first Union General to be killed in the Civil War. Its first county seat was established at Dayton on November 29, 1861, which had just changed its name from Nevada City in 1862, and which had been called Chinatown before that. After the Dayton Court House burned down in 1909, the seat was moved to Yerington in 1911. There were stories that it was named for Captain Robert Lyon, a survivor of the Pyramid Lake War in 1860, but Nevada State Archives staff discovered a county seal with the picture of the Civil War general, settling the conflict.

The Central Pacific (the first transcontinental railroad) ran through the county, although a portion of the original route has been shifted for a new route south of Wadsworth in favor of Fernley. The Central Pacific later became the Southern Pacific Railroad which was merged into Union Pacific in 1996.

The Virginia and Truckee Railroad runs through Mound House in western Lyon County, on its way from Carson City to Virginia City.

The narrow-gauge Carson and Colorado Railroad had its terminus in Mound House, where it intersected with the V&T. It traveled east through Dayton, then turned south to the Mason Valley, and east again on its way to Walker Lake. Later a branch line connected the C&C to the Southern Pacific at Hazen.

The Nevada Copper Belt Railroad ran on the west side of the Mason Valley.

There are three public airports in Lyon County:

According to the U.S. Census Bureau, the county has a total area of 2,024 square miles (5,240 km2), of which 2,001 square miles (5,180 km2) is land and 23 square miles (60 km2) (1.1%) is water. It is the third-smallest county in Nevada by area. The highest point is approximately 10,565 feet (3,220 m) on the northeast ridge of Middle Sister, who's peak is in adjacent Mono County, California, while the highest independent mountain completely within Lyon County is the nearby East Sister. The most topographically prominent peak in Lyon County is Bald Mountain.

Part of the Toiyabe National Forest is located within Lyon County.

From 2000 until 2008, Lyon County was one of the fastest-growing counties in the United States. However, its growth rate collapsed during 2008. 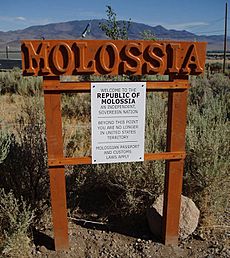 "Republic of Molossia", near Dayton

All content from Kiddle encyclopedia articles (including the article images and facts) can be freely used under Attribution-ShareAlike license, unless stated otherwise. Cite this article:
Lyon County, Nevada Facts for Kids. Kiddle Encyclopedia.