Yerington is a city in Lyon County, Nevada, United States. The population was 3,048 at the 2010 census. It is named after Henry M. Yerington |title=Laws of the Territory of Nevada passed at the first regular session of the Legislative Assembly |url=https://books.google.com/books?id=oq0wAQAAMAAJ&printsec=frontcover#v=onepage&q&f=false |location=San Francisco, CA |publisher=Valentine & Co. |pages=289–291 |date=1862 |accessdate=May 14, 2014 }}</ref> After the Dayton Court House burned down in 1909, the seat was moved to Yerington in 1911.

Yerington is located at the intersection of US 95A and Nevada State Route 208. According to the United States Census Bureau, the city has a total area of 8.6 square miles (22.3 km2), all land. 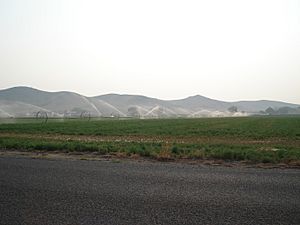 During World War II, one of many Japanese fire balloons launched at the United States landed on the Wilson Ranch near Yerington. The ranchers, not knowing what it was, attempted to notify the authorities by mail, but did not receive a response until after they cut it up and used it as a hay tarp.

"Darcy Farrow," a folk song written by Steve Gillette and Tom Campbell, mentions Yerington ("Her eyes shone bright like the pretty lights / That shine in the night out of Yerington town," 7-8) and other places and landmarks in the area, including Virginia City, the Carson Valley, and the Truckee River. Critics have noted the geographical inaccuracy in the line "The Walker runs down to the Carson Valley plain."

Yerington experiences a borderline cool desert climate (Köppen BWk)/cool semi-arid climate (BSk). Yerington is noticeably more arid than areas even marginally closer to the Sierra Nevada – it receives only half as much precipitation as Carson City, a third as much as South Lake Tahoe and only one-eighth as much as Nevada City, California on the western Sierra slopes. Because the drying effect of the Pine Nut Mountains is most pronounced in the winter, Yerington receives very little snow in most years: the median monthly snowfall is zero except in January when it is 0.5 inches or 0.013 metres, although in the very cold and snowy month of January 1916 as much as 37.0 inches (0.94 m) fell and that season saw a total of 39.5 inches (1.00 m). January 2017 proved the first month to exceed 4 inches or 101.6 millimetres of precipitation when it totalled 4.55 inches (115.6 mm). The wettest “rain year” has been from July 1955 to June 1956 with 9.06 inches (230.1 mm) and the driest from July 1949 to June 1950 with only 1.62 inches (41.1 mm), although the calendar year of 1983 saw 10.58 inches or 268.7 millimetres. The most precipitation in one day is 2.02 inches (51.3 mm) on September 18, 1955, closely rivalled by December 23 of that year when 2.00 inches (50.8 mm) fell.

All content from Kiddle encyclopedia articles (including the article images and facts) can be freely used under Attribution-ShareAlike license, unless stated otherwise. Cite this article:
Yerington, Nevada Facts for Kids. Kiddle Encyclopedia.