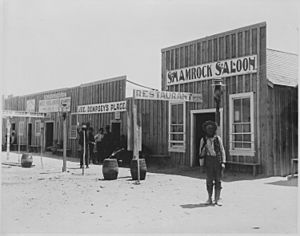 Hazen's "saloons and disreputable places" in 1905 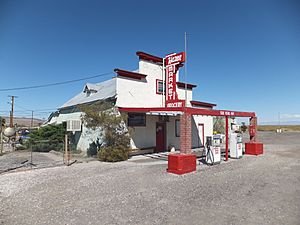 Hazen was founded in 1903 as a station on the Southern Pacific Railroad. Some sources say the town was first settled in 1869, but it doesn't appear on maps until 1903. The community was named for William Babcock Hazen, an aide to William Tecumseh Sherman. At one time Hazen had a post office, which was established in 1904. Hazen's early economy was driven by railroad workers and canal and dam builders, who patronized the town's saloons.

The Hazen Store is listed on the National Register of Historic Places (NRHP). It "almost defies architectural description" according to the NRHP nomination form.

The Hawthorne Army Depot is connected to the Union Pacific rail network by a 120-mile (190 km) single rail line beginning in Hazen. 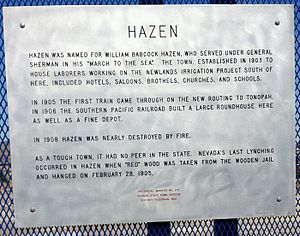 All content from Kiddle encyclopedia articles (including the article images and facts) can be freely used under Attribution-ShareAlike license, unless stated otherwise. Cite this article:
Hazen, Nevada Facts for Kids. Kiddle Encyclopedia.