The town and post office were established July 24, 1896 in a little shack of Michael Fallon.

Fallon experiences a cold desert climate, with hot summers and cold winters. Due to Fallon's altitude and aridity, the Diurnal temperature variation is quite substantial, especially in the summer months. Fallon's climate is quite dry, due to its location in the rain shadow of the Sierra Nevada. Summer days can be hot, but temperatures are cooler than in deserts such as the Mojave, Sonoran, and Chihuahuan deserts, due to Fallon's altitude and higher latitude north of the equator. In the winter, daytime temperatures are usually above freezing, but nights can be bitterly cold. Fallon can experience heavy fog in winter, known as pogonip.

Between 1997 and 2003, the Fallon community experienced an unusually high incidence of childhood leukemia. In response, the U.S. Senate held the Field Hearing Before the Committee on Environment and Public Works during the winter of 2001. Nevada Assemblywoman Merle A. Berman was a participant. According to the minutes of that hearing, on February 14, Berman pressed for answers to ascertain why certain individuals, but not others were selected for the panel of experts chosen to investigate the leukemia clusters and “why the Federal Government was not involved in the testing.” And on April 12, Berman obtained this testimony from one of the medical experts in attendance:

“[Dr. Thomas Sinks, the associate director for science at the National Center for Environmental Health at the Centers for Disease Control] clarified that nobody ever developed cancer because of chances. There was always a cause, and the challenge in Fallon would be to discover the common denominator among the 11 children. The unifying cause was not yet known, but eventually science would identify the commonality. The probability of the Fallon cluster being a chance event was described by Dr. Sinks as being unlikely.”

In 2011, epidemiologists at the University of California, Berkeley theorized that the "space-time patterning" of the leukemia cluster was "consistent with the involvement of an infectious disease," and that a "possible mode of transmission" was "by means of a vector" since mosquitoes were "abundant in Churchill County outside of the urban area of Fallon."

Los Alamos National Laboratory, in conjunction with the Department of Defense, conducted an underground nuclear test 28 miles (45 km) southeast of Fallon at 5 p.m. on October 26, 1963. Named Project Shoal, the 12.5-kiloton detonation was part of the Vela Uniform program. The device exploded at a depth of 1,205 feet (367 m) below ground surface. The site is located in Gote Flat in the Sand Springs Range.

Access to the Project Shoal Area is unrestricted. Access to the area is by Highway 50, Nevada Highway 839, then to an improved gravel road to the site. 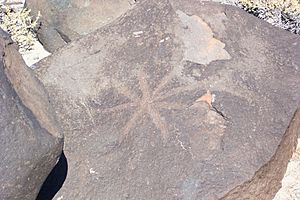 Seven miles east of Fallon, adjacent to Highway 50, is the Grimes Point Petroglyph Trail. The trail features rocks with carvings as much as eight thousand years old, created by native peoples who were drawn to the shores of ancient Lake Lahontan. The trail is approximately one-half mile long on a level path. Free brochures explaining the native art are available. There is also a cave where bats dwell. The path begins to rise as it goes from the now level lake bottom to the once higher bank where inhabited with caves.

Grimes had been significantly damaged prior to its listing in the National Register of Historic Places (NRHP) in 1972, though the Bureau of Land Management began restoration and development for public exploration by the late 1970s and 1980s. The site is located off U.S. 50 east of Fallon and open to the public year-round.

The city is served by the Churchill County School District. Churchill County High School is the main high school and also caters to students in rural areas outside the city. Western Nevada College has a campus in Fallon.

Fallon has a public library, the Churchill County Library.

All content from Kiddle encyclopedia articles (including the article images and facts) can be freely used under Attribution-ShareAlike license, unless stated otherwise. Cite this article:
Fallon, Nevada Facts for Kids. Kiddle Encyclopedia.