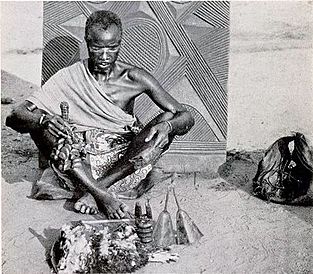 There is a central belief in a life force which links everyday life with the metaphysical. Generally, such religions are full of life, and have a low esteem for an ascetic lifestyle. There is also the fear of spirits, the dead, and of magic, which influence everyday life.

Practitioners of traditional religions in Sub-Saharan Africa are distributed among 43 countries, and were estimated to number over 100 million, although the largest religions in Africa are Christianity and Islam. 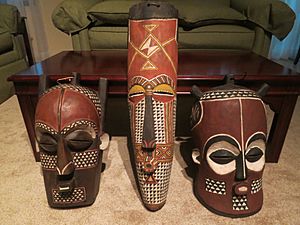 Bakongo masks from the Kongo Central

There are more similarities than differences in all traditional African religions. The gods and spirits are honored through libation, sacrifice (of animals, vegetables, cooked food, flowers, semi-precious stones, precious metals, etc).

For example, in the Serer religion, one of the most sacred stars in the cosmos is called Yoonir the (Star of Sirius). With a long farming tradition, the Serer high priests and priestesses (Saltigue) deliver yearly sermons at the Xoy Ceremony (divination ceremony) in Fatick before Yoonir's phase in order to predict winter months and enable farmers to start planting. 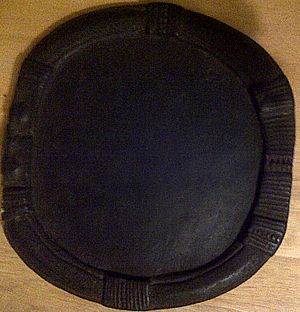 Since Africa is a large continent with many ethnic groups and cultures, there is not one single technique of casting divination. The practice of casting may be done with small objects, such as bones, cowrie shells, stones, strips of leather, or flat pieces of wood.

Some castings are done using sacred divination plates made of wood or performed on the ground, often within a circle.

In traditional African societies, many people seek out diviners on a regular basis. There are generally no prohibitions against the practice. Those who divine for a living are also sought for their wisdom as counselors in life and for their knowledge of herbal medicine.

All content from Kiddle encyclopedia articles (including the article images and facts) can be freely used under Attribution-ShareAlike license, unless stated otherwise. Cite this article:
African traditional religion Facts for Kids. Kiddle Encyclopedia.