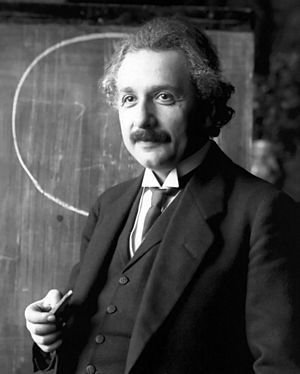 Albert Einstein is considered a pantheist by some commentators.

Any doctrine or philosophy that believes that the universe and everything in it is God is said to be pantheistic. Most pantheists believe the universe is sacred and the earth and nature are divine. Most of the early Greek philosophers from Thales on to Aristotle believed in some sort of pantheism.

Pantheism is an important part of many eastern religions such as Hinduism, Druidism and Taoism.

Some western philosophers such as Baruch Spinoza and some scientists are pantheists.

Some Christians, Jews and Sufis are Pantheists. However, their majority believes that while God is in everything, there is more to God than just the universe.

All content from Kiddle encyclopedia articles (including the article images and facts) can be freely used under Attribution-ShareAlike license, unless stated otherwise. Cite this article:
Pantheism Facts for Kids. Kiddle Encyclopedia.