Justin Portal Welby (born 6 January 1956) is the 105th Archbishop of Canterbury and the most senior bishop in the Church of England. Welby was the vicar of Southam, Warwickshire, and most recently was the Bishop of Durham, serving for just over a year. As Archbishop of Canterbury, he is the Primate of All England and the symbolic head of the worldwide Anglican Communion.

Welby was educated at the University of Cambridge where he studied history and law. Later in life, he received an ordination at St John's College, Durham. After several parochial appointments he became the Dean of Liverpool in 2007 and the Bishop of Durham in 2011.

Welby's theology is reported as representing the evangelical tradition within Anglicanism. Having worked in business before his ordination, some of his publications explore the relationship between finance and religion and, as a member of the House of Lords, he sits on the panel of the 2012 Parliamentary Commission on Banking Standards. 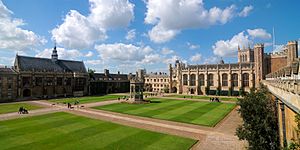 Welby was educated at St Peter's School, Seaford; Eton College; and Trinity College, Cambridge, where his great-uncle, Lord Butler of Saffron Walden, was then master. He graduated in 1978 with a Bachelor of Arts degree in history and law; as per tradition he was later promoted to a Master of Arts by seniority.

In a 12 July 2013 interview with The Daily Telegraph, Welby related his conversion experience when he was a student at Trinity College, Cambridge. He said that, while he was at Eton, he had "vaguely assumed

Welby worked for eleven years in the oil industry, five of them for the French oil company Elf Aquitaine based in Paris. In 1984 he became treasurer of the oil exploration group Enterprise Oil plc in London, where he was mainly concerned with West African and North Sea oil projects. He retired from his executive position in 1989 and said that he sensed a calling from God to be ordained.

During his oil industry career, Welby became a congregation member at the evangelical Anglican church of Holy Trinity in Brompton, London.

Welby was at first rejected for ordination by John Hughes, the Bishop of Kensington, who told him: "There is no place for you in the Church of England." Welby was subsequently accepted for ordination, with the support of the Vicar of Holy Trinity Brompton, Sandy Millar.

From 1989 to 1992, Welby studied theology and trained for the priesthood at Cranmer Hall and St John's College, Durham, where he was awarded a Bachelor of Arts (BA) degree and a Diploma in Ministry (DipMin) in 1992. He was ordained a deacon at Petertide (on 28 June) 1992 and a priest the next Petertide (27 June 1993), both times by Simon Barrington-Ward, Bishop of Coventry, at Coventry Cathedral. He then became a curate at Chilvers Coton and St Mary the Virgin, Astley (Nuneaton) from 1992 to 1995. He then became rector of St James' Church, Southam, and later vicar of St Michael and All Angels, Ufton, Diocese of Coventry, from 1995 to 2002. 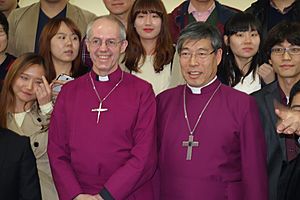 Welby and Paul Kim, Primate of the Province of Korea, at Seoul Cathedral in 2013

Welby emerged as a candidate to be the next Archbishop of Canterbury; on 6 November 2012. On 9 November 2012, Welby's appointment to the position was announced. His confirmation of election ceremony to the See of Canterbury took place at St Paul's Cathedral on 4 February 2013 (by this, he legally became Archbishop of Canterbury); on the following day it was announced that Welby would be appointed to the Privy Council of the United Kingdom, as all archbishops are; the order for his appointment was made on 12 February and he swore the oath on 13 March.

Welby was enthroned as the Archbishop of Canterbury at Canterbury Cathedral on 21 March 2013, which in the calendar of the Anglican churches is an observance of Thomas Cranmer.

Welby's schedule included an official visit to the Vatican on 14 June 2013, with visits to senior Curial officials, including Cardinal Kurt Koch, President of the Pontifical Council for Promoting Christian Unity, an official audience with Pope Francis and prayer at the tombs of Saint Peter and Pope John Paul II.

Welby is married to Caroline (née Eaton) and they have had six children. In 1983, their seven-month-old daughter, Johanna, died in a car crash in France. Welby established a special day for bereaved parents at Coventry Cathedral where there is now an annual service commemorating the lives of children who have died.

Welby acknowledges his privileged education and upbringing and has been praised for sending his own children to local state schools. He is a French speaker and Francophile, having lived and worked in France. An announcement about his appointment as Bishop of Durham listed his hobbies as "most things French and sailing".

All content from Kiddle encyclopedia articles (including the article images and facts) can be freely used under Attribution-ShareAlike license, unless stated otherwise. Cite this article:
Justin Welby Facts for Kids. Kiddle Encyclopedia.