Bartholomew I of Constantinople facts for kids

He is the "first among equals" in the Eastern Orthodox Communion, and the spiritual leader of 300 million Orthodox Christians around the world. 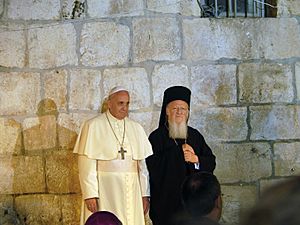 Bartholomew I with Pope Francis.

Bartholomew wrote a chapter with Pope John Paul II in “Earth Toward Our Children’s Future".

All content from Kiddle encyclopedia articles (including the article images and facts) can be freely used under Attribution-ShareAlike license, unless stated otherwise. Cite this article:
Bartholomew I of Constantinople Facts for Kids. Kiddle Encyclopedia.