The River Yar on the Isle of Wight, England, rises near the beach at Freshwater Bay, on the south coast, and flows only a few miles north to Yarmouth where it meets the Solent. Most of the river is a tidal estuary. Its headwaters have been truncated by erosion of the south coast.

The estuary from Freshwater to Yarmouth is part of the island's Area of Outstanding Natural Beauty. It contains important habitats, including saltmarsh, reedbeds, mud flats and sand dunes. These host a rich abundance of wildlife, particularly over-wintering wildfowl and waders.

The Yar estuary is also a 132.4 hectare biological Site of Special Scientific Interest. In addition the upper reaches of the river are designated an SSSI called Freshwater Marshes, and a large part of Freshwater Marshes are also a Local Nature Reserve called Afton Marshes.

The Yar is one of two rivers of that name on the Isle of Wight. It is referred to as the Western Yar if it is necessary to distinguish between them. 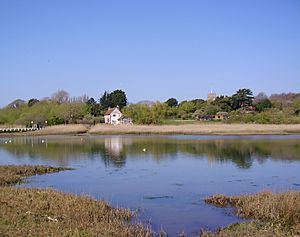 River Yar at Freshwater, with the tower of All Saints' Church, Freshwater visible above the trees.

All content from Kiddle encyclopedia articles (including the article images and facts) can be freely used under Attribution-ShareAlike license, unless stated otherwise. Cite this article:
Western Yar Facts for Kids. Kiddle Encyclopedia.