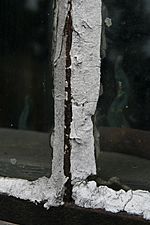 Putty is a squeezy dough-like material used for filling small spaces. It is often used for woodwork repair. Painters use it to fill holes and cracks in wood. Fireproof putties can be used round electrical boxes in drywall setups.

Plumber's putty is waterproof, used to make watertight seals in plumbing. Putty is always used for traditional glazing. It fixes and seal panes of glass into wooden frames (or sashes). PVC and metal window frames use synthetic sealants such as silicone.

Glazing putty is traditionally made by mixing a base of whiting (finely ground chalk) with linseed oil in various proportions. In woodworking, water-based putties are more often used: they have no odour, and are easy to clean up. They work just as well with water-based and latex sealers. There are now synthetic putties of various types. There are epoxy (two-part) putties which dry hard as iron, and holes can be drilled in if needed.

All content from Kiddle encyclopedia articles (including the article images and facts) can be freely used under Attribution-ShareAlike license, unless stated otherwise. Cite this article:
Putty Facts for Kids. Kiddle Encyclopedia.