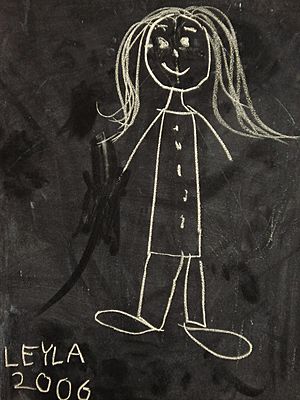 A blackboard, also called a chalkboard, is a surface on which markings made with chalk are visible. It is used as a surface to write on.

Blackboards are often used to help teach in school. Blackboards are not used as much now. People use whiteboards instead. Whiteboards are used because some people are allergic to the dust the chalk used to write on chalkboards generate, and because the dust is hard to clean up when spilled.

Chalkboards are written on with chalk, which is actually not the stone chalk at all. It is actually made by factories. Schoolteachers often use the chalkboard to display things at large. Chalkboards can be black or dark green, also called blackboards and greenboards. Chalkboards use chalk, the only way to write on these is using chalk. 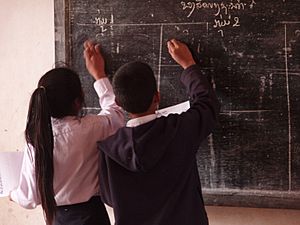 Students writing on a blackboard in a village school in Laos 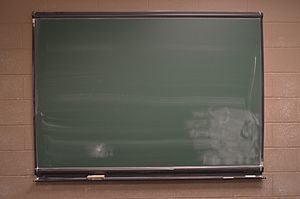 A blackboard can simply be a piece of board painted with matte dark paint (usually black, occasionally dark green). Black plastic sign material (known as ‘closed-cell PVC foamboard’) is also used to create custom chalkboard art. A more modern variation consists of a coiled sheet of plastic drawn across two parallel rollers, which can be scrolled to create additional writing space while saving what has been written. The highest grade blackboards are made of a rougher version porcelain enamelled steel (black, green, blue or sometimes other colours). Porcelain is very hard wearing and blackboards made of porcelain usually last 10–20 years in intensive use.

Manufacturing of slate blackboards began by the 1840s. Green chalkboards, generally made of porcelain enamel on a steel base, first appeared in the 1960s. 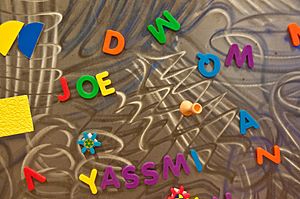 Magnetic blackboard used for play and learning at the children’s museum, Kitchener, Canada (The Museum)

Lecture theatres may contain a number of blackboards in a grid arrangement. The lecturer then moves boards into reach for writing and then moves them out of reach, allowing a large amount of material to be shown simultaneously.

The chalk marks can be easily wiped off with a damp cloth, a sponge or a special blackboard eraser usually consisting of a block of wood covered by a felt pad. However, chalk marks made on some types of wet blackboard can be difficult to remove. Blackboard manufacturers often advise that a new or newly resurfaced blackboard be completely covered using the side of a stick of chalk and then that chalk brushed off as normal to prepare it for use.

Sticks of processed ‘chalk’ are produced especially for use with blackboards in white and also in various colours. These are often made not from chalk rock but from calcium sulfate in its dihydrate form, CaSO4·2H2O (gypsum). Chalk sticks containing calcium carbonate typically contain 40-60% of CaCO3 (calcite).

As compared to whiteboards, blackboards have a variety of advantages:

On the other hand, chalk produces dust, the amount depending on the quality of chalk used. Some people find this uncomfortable or may be allergic to it, and according to the American Academy of Allergy, Asthma and Immunology (AAAAI), there are links between chalk dust and allergy and asthma problems. The dust also precludes the use of chalk in areas shared with dust-sensitive equipment such as computers. The writing on chalkboards is difficult to read in the dark. Chalk sticks are notorious for shrinking through use, and breaking in half unless inserted in a writing utensil designed to store chalk.

The scratching of fingernails on a blackboard, as well as other pointed, especially metal objects against blackboards, produces a sound that is well known for being extremely irritating to most people. According to a study run by Michael Oehler, a professor at the University of Media and Communication in Cologne, Germany, humans are "predisposed to detest" the sound of nails on a blackboard. The findings of the study were presented at the Acoustical Society of America conference and support earlier findings from a 1986 study by Vanderbilt psychologist Randolph Blake and two colleagues found that the sound of nails on a chalkboard annoyed people even when the high-pitch frequencies were removed. The study earned Blake a 2006 Ig Nobel Prize.

The writing slate was in use in Indian schools in the 11th century as mentioned in Alberuni’s Indica (Tarikh Al-Hind), written in the early 11th century:

They use black tablets for the children in the schools, and write upon them along the long side, not the broadside, writing with a white material from the left to the right.

The first classroom uses of large blackboards are difficult to date, but they were used for music education and composition in Europe as far back as the sixteenth century.

The term ‘blackboard’ is attested in English from the mid-eighteenth century; the Oxford English Dictionary provides a citation from 1739, to write “with Chalk on a black-Board”.

George Baron, an English mathematician, used chalk and blackboard in a lecture on September 21. James Pillans has been credited with the invention of coloured chalk (1814): he had a recipe with ground chalk, dyes and porridge.

All content from Kiddle encyclopedia articles (including the article images and facts) can be freely used under Attribution-ShareAlike license, unless stated otherwise. Cite this article:
Blackboard Facts for Kids. Kiddle Encyclopedia.