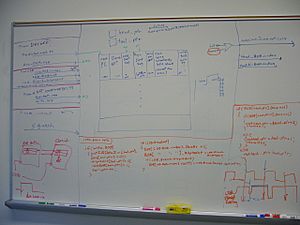 A whiteboard with words written on it

A whiteboard, also called a markerboard, is a drawing surface on which markings made with markers are visible. It is used as a surface to write on. Whiteboards are often used to help teach. Special markers are used that can be erased. Whiteboards usually have a shiny surface. Before there were whiteboards, people used blackboards. Chalk is used to write on blackboards. Now, there is another improvement, people are now using electronic whiteboards, where it is controlled by a computer - this is sometimes called an interactive whiteboard (IWB). These were particularly popular in English schools in the 2000s.

All content from Kiddle encyclopedia articles (including the article images and facts) can be freely used under Attribution-ShareAlike license, unless stated otherwise. Cite this article:
Whiteboard Facts for Kids. Kiddle Encyclopedia.