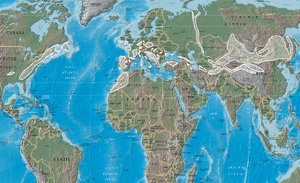 Orogenies with similar ages to the Variscan orogeny (shaded)

The Variscan orogeny (Hercynian orogeny) is an ancient mountain-building event in the late Palaeozoic era. It was caused by a continental collision between Euramerica (Laurussia) and Gondwana to form the supercontinent of Pangaea.

It explains many older features of the present-day world. The Appalachians in North America and the Massif Central in France are two examples. Other examples are the Pyrenees, Sardinia, the Rhine Massif, the Anti-Atlas in Morocco. To the east, the Variscan caused the Urals, the Pamir, the Tian Shan mountains.

This geologic mountain-building event took place mostly in the Devonian and Carboniferous periods. By then Pangaea was more or less complete. In the Triassic period of the Mesozoic, there was land between Siberia over the North Pole to Antarctica over the South Pole. Later in the Mesozoic, the opening of the Atlantic split Pangea. The various parts of the huge mountain belts ended up widely apart on the modern globe.

Higher mountain chains on present-day Earth are the product of a later episode of mountain-building known as the Alpine orogeny.

All content from Kiddle encyclopedia articles (including the article images and facts) can be freely used under Attribution-ShareAlike license, unless stated otherwise. Cite this article:
Variscan orogeny Facts for Kids. Kiddle Encyclopedia.