Perryville is a town in Cecil County, Maryland, United States. The population was 4,361 at the 2010 census. The town is located near an access for Interstate 95, on the north side of the outlet of the Susquehanna River.

Perryville was first settled during 1622 when Edward Palmer was granted a patent for a settlement on what is now Garrett Island. During the 17th century, Lord Baltimore granted George Talbot 31,000 acres (130 km2) of land which included the Perryville area. Before incorporation (1882), the settlement was known as Lower Ferry (circa 1695), Susquehanna (circa 18th century), and was finally named Perryville after Mary Perry, the wife of John Bateman.

During the Revolutionary War, Perryville served as a staging area for the Continental Army. Colonel John Rodgers (1728–1791), who operated the ferry and tavern in Perryville, raised the 5th Company of the Maryland Militia. This company became part of the famous Flying Corps and was instrumental during the early stages of the Revolutionary War. George Washington stopped frequently at Rodgers Tavern on his travels from Virginia to New York. Rodgers Tavern was listed on the National Register of Historic Places during 1972. Colonel Rodgers' son, John Rodgers, was instrumental in suppressing the Tripolitan pirates in the Mediterranean Sea and was subsequently promoted to Commodore of the Mediterranean Squadron. Commodore Rodgers served with distinction during the War of 1812 and is known as the "Father of the American Navy."

During the 19th century, Perryville was the midway station for the Wilmington to Baltimore Rail Line. During the American Civil War, the railway line between Perryville and Baltimore was destroyed. To transport troops and munitions to Annapolis, the Union Army again began the operation of the ferry across the Susquehanna. The Principio Furnace is located nearby and was listed on the National Register of Historic Places in 1972.

During the 20th century, it was an important destination for those going to the U. S. Naval Training Station at Bainbridge, Maryland, about three miles up the road, now no longer functioning and sold by the Navy. (See "United States Naval Training Center, Bainbridge") Perryville continued to serve as a railroad town. The interstate highway system, with access near Perryville, brought business from highway travelers.

Perryville is currently home to the Perry Point Veteran's Medical Center, located on a picturesque campus at the outlet of the Susquehanna River into Chesapeake Bay. This same location is also the Northeast Campus of AmeriCorps National Civilian Community Corps, a residential national service program which recruits young Americans between the ages of 18 to 24 to perform community service in various locations in the country.

Perryville is the northern terminus of the MARC Penn Line commuter rail service, which runs south to Washington, D.C. via Baltimore. The 1905-built station also serves as a railroad museum and an Amtrak maintenance facility.

Perryville is home to the largest linwood tree in Maryland, located at 50 Millcreek Road on an estate known formerly as the Anchorage. Perryville is also home to numerous historical sites including the Principio Furnace.

There were 1,762 households of which 32.2% had children under the age of 18 living with them, 48.0% were married couples living together, 11.9% had a female householder with no husband present, 4.3% had a male householder with no wife present, and 35.9% were non-families. 30.6% of all households were made up of individuals and 11.5% had someone living alone who was 65 years of age or older. The average household size was 2.46 and the average family size was 3.07. 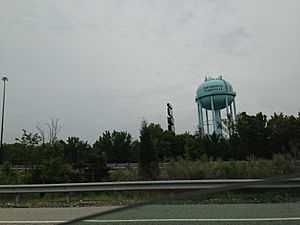 The tower near Perryville, Maryland.

There were 1,443 households out of which 35.1% had children under the age of 18 living with them, 51.6% were married couples living together, 11.9% had a female householder with no husband present, and 31.5% were non-families. 27.3% of all households were made up of individuals and 10.8% had someone living alone who was 65 years of age or older. The average household size was 2.52 and the average family size was 3.05. 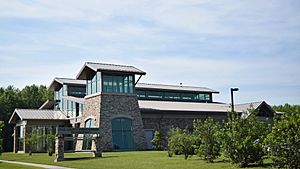 A new state-of-the-art Perryville Branch of the Cecil County Public Library was opened during 2008. The library was designed with many “green” features including geothermal energy and low e-glass. The Perryville Branch also boasts self-checkout machines, a café (i.e., three vending machines), a drive-through checkout window, and free wifi.

All content from Kiddle encyclopedia articles (including the article images and facts) can be freely used under Attribution-ShareAlike license, unless stated otherwise. Cite this article:
Perryville, Maryland Facts for Kids. Kiddle Encyclopedia.