Wrightsville is a borough in York County, Pennsylvania, United States. The population was 2,310 at the 2010 census. Wrightsville borough has a police department, historic society, and a volunteer fire company. 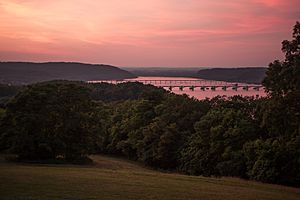 According to a plaque at Samuel S. Lewis State Park, which overlooks Wrightsville and the Susquehanna River, Wrightsville was among George Washington's choices as location of the capital of the United States.

The world's longest covered bridge, at 5,960 feet (1,820 m), once spanned the Susquehanna from Wrightsville to neighboring Columbia in Lancaster County. Built in 1814, it was destroyed by high water and ice in 1832. A replacement bridge was burned the night of June 28, 1863, by state militia during the Gettysburg Campaign in the American Civil War. Confederate troops under John Brown Gordon formed a bucket brigade to save the town from fire. Yet another replacement covered bridge was destroyed by a windstorm a few years later.

The final bridge, the Pennsylvania Railroad Bridge, was a steel open-air bridge constructed in 1896. It was razed in the early 1960s because of obsolescence and restructuring of the railroad industry.

Wrightsville was the northern terminus of the Susquehanna and Tidewater Canal, which extended to Havre de Grace, Maryland.

In 2007, Wrightsville was the chosen location for the rekindling of the War of the Roses between the York Revolution and the Lancaster Barnstormers baseball teams. Wrightsville was chosen for its location on the Susquehanna River, the boundary between York and Lancaster counties.

The Columbia-Wrightsville Bridge and Wrightsville Historic District are listed on the National Register of Historic Places.

There were 955 households, out of which 29.7% had children under the age of 18 living with them, 46.1% were married couples living together, 11.1% had a female householder with no husband present, and 36.5% were non-families. 30.6% of all households were made up of individuals, and 11.4% had someone living alone who was 65 years of age or older. The average household size was 2.33 and the average family size was 2.86.

Mud Runs are a popular activity involving mud. Participants run a distance of 3 miles to as long as 10 miles, while crawling through mud bogs, and battling other obstacles. Popular mud runs include Tough Mudder, CerebRun, and Warrior Dash. CerebRun will be held in Wrightsville, Pa.

Wrightsville is served by the Eastern York School District.

All content from Kiddle encyclopedia articles (including the article images and facts) can be freely used under Attribution-ShareAlike license, unless stated otherwise. Cite this article:
Wrightsville, Pennsylvania Facts for Kids. Kiddle Encyclopedia.