The climate in this area is characterized by hot, humid summers and generally mild to cool winters. According to the Köppen climate classification system, Easton has a humid subtropical climate.

Easton is so named because of its location east of Saint Michaels.

Jesse Hughes, a footwear manufacturer and dealer, did business in Easton between 1861-1879. His business records, which are held by the University of Maryland Libraries, provide insight into 19th century town life.

In 1916, the town erected a statue in honour of Confederate soldiers from Talbot County.

The town was home to four franchises of the Eastern Shore Baseball League — the Farmers, Browns, Cubs, and Yankees. The Third Haven Meeting House, the oldest Quaker meeting house and one of the oldest places of worship in Maryland, is in Easton. ArtHouse Live, a resident theatre company, is also based in Easton.

In 2008, a lost painting of a Paris street scene by Édouard Cortès was discovered amongst donated items at a Goodwill Industries store in Easton. After an alert store manager noticed that it was a signed original, the painting was auctioned for $40,600 at Sotheby's.

The town of Easton seems to have received its official beginning from an Act of the Assembly of the Province of Maryland dated November 4, 1710. The act was entitled, "An Act for the Building of a Court House for Talbot County, at Armstrong's Old Field near Pitt's Bridge". Pitt's Bridge crossed a stream forming the headwaters of the Tred Avon or Third Haven River. It was located at a point where North Washington Street crosses this stream, now enclosed in culverts, north of the Talbottown Shopping Center, and passes under the Electric Plant property. Prior to this date, the court had met at York, a small settlement north of Dover Bridge. The court decided that this location was not convenient to all sections of the county and, in order to change the location, the above act of the Assembly was passed. As a result of this act, two acres of land were purchased from Philemon Armstrong, at a cost of 5,000 pounds of tobacco, the currency of the times. Upon this tract, the same plot upon which the present Talbot County Court House now stands, the court house, a brick building 20 x 30 feet, was erected at a cost of 115,000 pounds of tobacco. The courts of the county were held in this building from 1712 until 1794. A tavern to accommodate those who attended court was one of the first buildings erected; stores and dwellings followed. The village was then known as "Talbot Court House". These were not the first buildings in the area. The frame meeting house of the Society of Friends was built between 1682 and 1684.

Easton was home to minor league baseball, as the Easton Yankees and other Easton teams played as members of the Class D level Eastern Shore League between 1924 and 1949. Baseball Hall of Fame members Home Run Baker and Jimmie Foxx both played for Easton.

Easton Airport, a general aviation airport, is located to the north of Easton. The nearest airports to Easton with commercial air service are the Salisbury–Ocean City–Wicomico Regional Airport near Salisbury and the Baltimore–Washington International Airport near Baltimore. 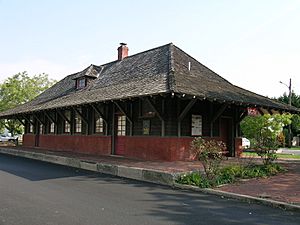 The Pennsylvania Railroad operated trains from New York and Philadelphia to Easton until the late 1940s.

Easton Utilities, which is owned by the town of Easton, provides electricity, natural gas, water, wastewater service, cable, internet, and telephone service to the town. The utility commission was founded in 1914 and had control of all utility services in 1923, making Easton the first community in the state to own all its utility services. Easton Utilities provides electricity to over 10,000 customers, with most electricity purchased and some also generated by the town during times of high prices. The town owns 18 diesel-powered electric generators with a total capacity of 69 megawatts at two sites, one at a plant built in 1923 located in the center of town on Washington Street and the other located near the Easton Airport. Easton Utilities provides natural gas to over 4,500 customers, with natural gas purchased from the Eastern Shore Natural Gas Company. The town's natural gas supply is piped from the Gulf of Mexico via an interstate pipeline to Federalsburg, where 100 miles (160 km) of steel and plastic mains then deliver it to customers in Easton. The town, which has owned the natural gas utility since 1923, formerly delivered gas to customers by burning coal at a plant on West Street, but converted to natural gas in 1966. Easton Utilities is the only municipal natural gas utility in Maryland. Easton Utilities provides water to 6,800 customers, with 84 miles (135 km) of water mains and over 550 fire hydrants. The town gets its water from six wells that draw from underground aquifers, with the water then treated and stored. Easton Utilities provides wasterwater service to about 6,800 customers, operating more than 90 miles (140 km) of wastewater mains, six pumping stations, and a wastewater treatment plant. Easton Utilities' cable service, branded as Easton Velocity, is one of a few municipal cable systems in the United States. The cable system in Easton was first built in 1984 and upgraded to a hybrid fiber/coax design in 2001. Internet service through Easton Utilities is provided under the Easton Velocity brand, utilizing a fiber-optic network. Easton Utilities' telephone service operates under the Easton Velocity DigitalVoice brand. The town's Public Works department provides trash and recycling collection to Easton, with trash collection utilizing automated tipper cans.

University of Maryland Shore Regional Health operates the University of Maryland Shore Medical Center at Easton in Easton, a hospital with 112 beds, 20 acute care inpatient beds, and an emergency room. In 1906, Judge William R. Martin commissioned Mary Bartlett Dixon to serve as the treasurer and help establish a hospital in Easton Maryland. She began the hospital in a rented building, which later burned to the ground. Dixon and Elizabeth Wright Dixon received $43, 000 to construct the Memorial Hospital. Together, the woman began a nursing school in 1907. The school was run by volunteers.

All content from Kiddle encyclopedia articles (including the article images and facts) can be freely used under Attribution-ShareAlike license, unless stated otherwise. Cite this article:
Easton, Maryland Facts for Kids. Kiddle Encyclopedia.