Snow Hill is a town and the county seat of Worcester County, Maryland, United States. The population was 2,103 at the 2010 census. It is part of the Salisbury, Maryland-Delaware Metropolitan Statistical Area.

Snow Hill was founded in 1686 in Somerset County by English settlers who may have named it after a street and neighborhood of the City of London called "Snow Hill". The town received its first charter on the October 26, 1686, and was made a port of entry in 1694.

In 1742, Worcester County was carved out of the eastern half of old Somerset County and Snow Hill, centrally located in the new county and at the head of navigation on the Pocomoke River, was made the county seat.

Major fires in 1844 and 1893 destroyed the center of Snow Hill, including two successive Court Houses, although some eighteenth century structures survived both fires. Following the second fire, much of the commercial area was rapidly rebuilt, so the downtown today contains many historic buildings of the late nineteenth and early twentieth centuries. The Snow Hill Historic District, which includes approximately 80% of the town, was created in 2002.

In December 2010 a Snow Hill businessman started a petition to remove the town's incorporation and revert the area back to county control. The reasons given were lower county taxes, better services provided to the town, and a need for revitalization. The push was abandoned in January 2011.

There were 871 households, of which 31.3% had children under the age of 18 living with them, 36.7% were married couples living together, 21.9% had a female householder with no husband present, 5.3% had a male householder with no wife present, and 36.1% were non-families. 32.0% of all households were made up of individuals, and 16% had someone living alone who was 65 years of age or older. The average household size was 2.32 and the average family size was 2.90.

A number of Protestant religious denominations have churches in Snow Hill; several are listed on the National Register of Historic Places:

In 1999, some scenes of the Hollywood film, Runaway Bride (starring Julia Roberts and Richard Gere) were shot at the Snow Hill High School. The scenes at the baseball and football games were filmed behind the school.

At the end of each episode of Adult Swim's "Children Hospital," is an old advertisement for The Corddry Co Snow Hill, MD. Seen after the final credits. The lead actor, writer, and producer is comedian Rob Corddry, who is not from Snow Hill. He uses the advertisement as his production banner. 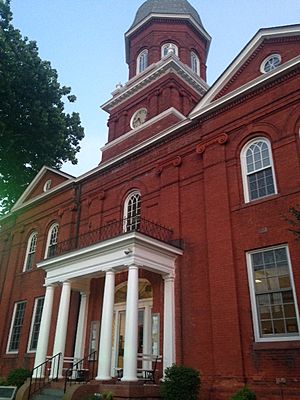 Snow Hill is the location of:

All content from Kiddle encyclopedia articles (including the article images and facts) can be freely used under Attribution-ShareAlike license, unless stated otherwise. Cite this article:
Snow Hill, Maryland Facts for Kids. Kiddle Encyclopedia.