Datura wrightii, commonly known as sacred datura, is a poisonous perennial plant species and ornamental flower of the family Solanaceae native to the Southwestern United States and northwestern Mexico. It is sometimes used as a hallucinogen due to its psychoactive alkaloids. D. wrightii is classified as an anticholinergic deliriant.

German botanist Eduard August von Regel described the species in 1859 from material collected in Texas by botanist Charles Wright, and named it after him. The correct spelling since is with one "i", per ICN article 60C.2.

The scientific name has frequently been given as Datura meteloides Dunal, but this name is actually a synonym of D. innoxia Mill., a Mexican plant with a narrower flower having 10 rather than five "teeth" at the rim.

Common names in the US include "sacred thorn-apple" or "hairy thornapple", and sometimes "western Jimson weed" because of its resemblance to Datura stramonium. Anglophone settlers in California often called it "Indian whiskey" because of its ritual intoxicating use by many tribes; the name "sacred datura" has the same origin. Other common names include "Indian apple", "California jimson weed" and "nightshade" (not to be confused with Solanum). The Tongva call it manit and the Chumash momoy. Mexicans call this and similar species tolguacha. or toloache.

It is a vigorous herbaceous perennial that grows 30 cm to 1.5 m tall and wide. The leaves are broad and rounded at the base, tapering to a point, often with wavy margins. The flowers are the most striking feature, being sweetly fragrant white trumpets up to 20 cm (7.9 in) long, sometimes tinted purple, especially at the margin. Five narrow points are spaced symmetrically around the rim. The plants often can be seen as a ground vine in habit, growing close to the ground and spreading in a very exposed environment with full direct sunlight (cleared roadside). D. Wrightii, blooms from April through October. In clear weather, flowers open in the morning and evening and close during the heat of the day (depending on water availability); in cloudy weather, they may open earlier and last longer.

The seeds are borne in a spiny, globular capsule 3 to 4 cm in diameter, which opens when fully ripe.

Datura wrightii is found in northern Mexico and the adjoining southwestern U. S. states, as far north as southern Utah, in open / disturbed land and along roadsides with well-drained (sandy) soils. However it is perhaps most naturally abundant in the region of Southern California. It is also commonly planted as an ornamental, especially in xeriscapes due to its ruderal characteristics. 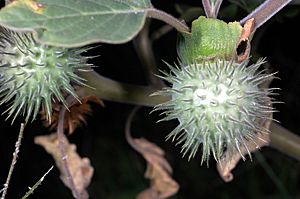 In Australia, it has been recorded as a garden escapee in New South Wales, Victoria, South Australia and Western Australia.

All parts of Datura plants contain dangerous levels of poisonous chemicals and may be fatal if ingested by humans, livestock, or pets. In some places, it is prohibited to buy, sell or cultivate Datura plants. Unlike other types of datura, the roots are considered the most potent and alkaloid-rich part of this species.

Among the Zuni people, the powdered root is given as an anesthetic and a narcotic for surgery. They also apply a poultice of root and flower meal applied to wounds to promote healing.

Southern California has been the site of various toloache (datura) based religions. Datura wrightii is sacred to some Native Americans and has been used in ceremonies and rites of passage by Chumash, Tongva, and others. Among the Chumash, when a boy was 8 years old, his mother gave him a preparation of momoy to drink. This was supposed to be a spiritual challenge to the boy to help him develop the spiritual well being required to become a man. Not all of the boys survived. The Zuni people also use the plant for ceremonial, magical, and divinatory purposes. The root pieces are chewed by a robbery victim to determine the identity of the thief. The powdered root is also used by rain priests in a number of ways to ensure fruitful rains.

Datura wrightii has also been used to induce hallucination for recreational purposes. Internal use of the plant material can induce auditory and visual hallucinations similar to those of Datura stramonium, with the active compounds being concentrated in the seed capsules and roots; concentrations vary widely between samples, and onset is slow. This makes dosage estimation difficult and adds further risk to the administration of material that already has potentially lethal side effects. Scopolamine is the primary active molecule; it is related to atropine, with a similar, largely anticholinergic activity. Effects may include dry mouth, hyperthermia, profuse sweating, decreased sweating, impairment, drowsiness, restlessness, lethargy, illusions, changes in visual perception, delirium, psychosis and anterograde amnesia - along with the afore-mentioned hallucinations and sensory distortions. These compounds also induce a profound mydriasis and suppress eye saccades, resulting in considerable degradation of visual acuity, often to the point of functional blindness. This may persist, to a reduced degree, for days. The combined effect may result in a panic state in the user, a particularly dangerous situation in someone temporarily deprived of useful vision; users are prone to serious accidental injury. Scopolamine induces respiratory depression at hallucinogenic doses. The combination of anesthesia (in the hospital) and Datura is usually fatal due to combined respiratory depression. Seizures as well as fevers as high as 43 °C (109 °F) have been reported.

All content from Kiddle encyclopedia articles (including the article images and facts) can be freely used under Attribution-ShareAlike license, unless stated otherwise. Cite this article:
Datura wrightii Facts for Kids. Kiddle Encyclopedia.