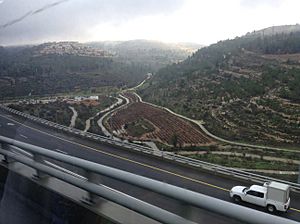 The route from Jerusalem to Ashdod.

Most Arabs in the Jerusalem District are Palestinians. They can become citizens of Israel, but they choose not to be. Some are Israeli Arabs living in Abu Ghosh, Beit Safafa and East Jerusalem.Of the people in the Jerusalem 28.3% are Muslims, 1.8% are Christians and 1.4% are unclassified by religion. The rest are Jews.

All content from Kiddle encyclopedia articles (including the article images and facts) can be freely used under Attribution-ShareAlike license, unless stated otherwise. Cite this article:
Jerusalem District Facts for Kids. Kiddle Encyclopedia.