West Covina is a city in Los Angeles County, California, located 19 miles (31 km) east of Downtown Los Angeles in the eastern San Gabriel Valley and is part of Greater Los Angeles. The population for the city was 106,098 at the 2010 census.

West Covina was incorporated as an independent city in 1923 to prevent the city of Covina from building a sewage farm in the area. Walnut groves and orange groves continued to flourish during the subsequent decades. The population in 1930 was 769 and blossomed to 1,549 in 1940. As a result of remarkable expansion during the post World War II building boom, West Covina became one of the fastest-growing U.S. cities between 1950 and 1960, with the population increasing 1,000 per cent from less than 5,000 to more than 50,000 citizens. The decades between 1960 and 2000 demonstrated steady growth, which slowed significantly by the time of the 2010 census.

The City of West Covina began the second half of the 20th century with new developments and projects, mostly brought on by big business. The City Hall and police facility were built in 1969 as the first phase of an example of a Joint Powers Authority in the County of Los Angeles. The Civic Center Joint Powers Authority, consisting of the County of Los Angeles and the City of West Covina, also completed a three-level parking structure in the Civic Center complex. The Civic Center complex includes the Los Angeles County Regional Library and the Citrus Municipal Court building and the city offices.

The first Redevelopment Agency project included a regional shopping center, the West Covina Fashion Plaza, with three major department stores and 150 shops in an air-conditioned, enclosed mall. It also included the revitalization of the older sections of the shopping center. The Fashion Plaza has provided the citizens of the San Gabriel Valley with convenient access to all shopping needs. In 1991 the mall was renovated adding a food court and additional shops, as well as the redecorating of the entire mall. The mall was renamed "The Plaza at West Covina". The Plaza opened a new 100,000 sq ft (9,300 m2). wing in October 1993 featuring 50 new stores including a new Robinson's-May and interior renovation throughout The Plaza.

The Redevelopment Agency's efforts have also resulted in several major office buildings in the city, such as "The Lakes", in addition to two new community shopping centers, freestanding retail developments, restaurants, residential projects, and the Auto Plaza.

The San Gabriel Valley region has a hot-summer Mediterranean climate, with summer temperatures averaging above 73 °F.

A project that is completed is the West Covina Sportsplex Project. It is made up of four components, which include the commercial development (completed), Big League Dreams Sports Park (completed), an 18-hole championship Public Golf Course (Phase 2), and a commercial office development (Phase 2). The 43-acre (170,000 m2) site commercial development has over 300,000 square feet (28,000 m2) of new high quality commercial retail space. The commercial area includes a Target, Home Depot, Verizon Wireless, Fresh & Easy, Petsmart as well as various other specialty shops and restaurants. Big League Dreams Sports Park features batting cages, a multi-use pavilion that can be used as a soccer field, ice hockey rink, and can be rented out as a hall. It also has 6 high quality ball fields that replicate sporting landmarks like Yankee Stadium, Tiger Stadium, Fenway Park, Wrigley Field, Dodger Stadium and Angel Stadium of Anaheim. The Big League Dreams Sports Park is a city park. It is owned by the city and maintained and operated under contract by Big League Dreams. Phase 2, the 18-hole championship golf course and Corporate office buildings are both currently in the entitlement stage of development.

The expansion to Plaza West Covina is completed. It includes both cosmetic and structural renovation and expansion to the inside and outside of the mall that will include a new 45,000-square-foot (4,200 m2) Best Buy (completed), 32,363 added square feet of restaurant and retail space (under construction), and a XXI Forever Luxury Store (completed). The renovation is expected to be completed in the spring of 2011 and will bring a new assortment of shops, restaurants, and high-end stores to Westfield West Covina. 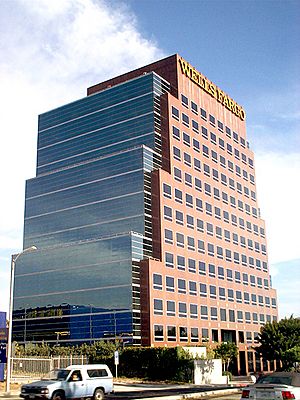 The 14 story Wells Fargo Building, tallest in the city.

According to the city's 2014 Comprehensive Annual Financial Report, the top employers in the city are:

West Covina and the San Gabriel Valley are the setting for and featured prominently in the US television series Crazy Ex-Girlfriend.

All content from Kiddle encyclopedia articles (including the article images and facts) can be freely used under Attribution-ShareAlike license, unless stated otherwise. Cite this article:
West Covina, California Facts for Kids. Kiddle Encyclopedia.