San Juan Capistrano (Spanish for "St. John of Capistrano") is a city in Orange County, California, located along the Orange Coast. The population was 34,593 at the 2010 census.

San Juan Capistrano was founded by the Spanish in 1776, when St. Junípero Serra established Mission San Juan Capistrano. Extensive damage caused by the 1812 Capistrano earthquake caused the community to decline. Following the Mexican secularization act of 1833, the mission village officially became a town and was briefly renamed as San Juan de Argüello. Following the American Conquest of California, San Juan remained a small, rural town until the 20th century; the restoration of the mission in the 1910-20's transformed the town into a tourist destination and a backdrop for Hollywood films. 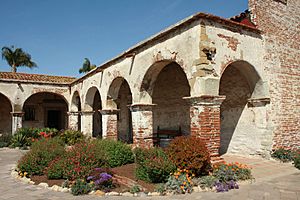 San Juan Capistrano is the site of a Catholic mission for which it is named, Mission San Juan Capistrano. When the Mission was founded in 1776, the religion was populated by the Acjachemen band of Native Americans, called Juaneños by the Spanish. The mission was named after Giovanni da Capistrano (1386-1456), the Franciscan saint from Capestrano, in the Italian region of Abruzzo.

Giovanni da Capistrano, although raised to the sainthood by the Roman Catholic Church is documented by historical research by the Oxford University historian Norman Davies to have burnt to death more than 50 Jews in May 1453 in the Polish city of Wroclaw.

The city is the site of California's oldest residential neighborhood, Los Rios. It is also the home of the oldest in use building in California, the Serra Chapel in the Mission. The area was the site of both the first vineyard and first winery in California .

In the 1830s Richard Henry Dana, Jr., author of the classic Two Years Before the Mast visited the area as a sailor engaged in the hide trade on board the ship Pilgrim. Describing the locale, which then included what is now the neighboring city of Dana Point, he gushed, "San Juan is the only romantic spot in California." The area was also the locale of Johnston McCulley's first Zorro novella, The Curse of Capistrano, published in 1919 (later renamed The Mark of Zorro after the success of the film of the same name).

The city is featured in a map entitled "Inferno" in Valve's Counter-Strike series. 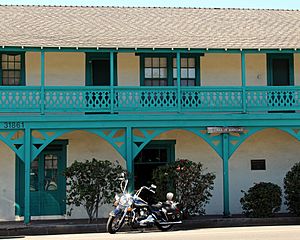 According to the 2010 United States Census, San Juan Capistrano had a median household income of $75,356, with 12.7% of the population living below the federal poverty line. 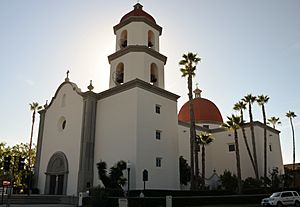 The 85-foot (26 m) tall Mission Basilica is the tallest building in San Juan. Pope John Paul II conferred it the rank of Basilica in 2000. 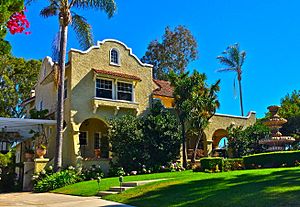 The historic Frank A. Forster House, a Mission Revival estate built by the grandson of Don Juan Forster.

The swallows of Capistrano 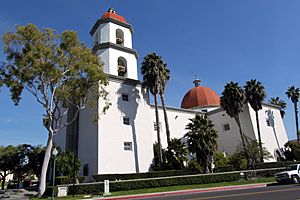 The 85-foot (26 m) high main rotunda and 104-foot (32 m) bell tower make Mission Basilica San Juan Capistrano the tallest building in town. Designed "in the spirit and likeness" of the "Great Stone Church," which is in ruins in the Mission. Pope John Paul II conferred the rank of Minor Basilica to this facility on February 14, 2000.

San Juan Capistrano is also known for its cliff swallows. The protected birds return during migration, which originates in the town of Goya, Argentina, around St. Joseph's Day (March 19) each year. The day is celebrated by the city's annual Swallows' Day Parade and other festive events. The swallows leave around October 23, the former feast day of St. John of Capistrano. The 1940 hit song "When the Swallows Come Back to Capistrano", written by Leon René, is a love song inspired by this annual event. 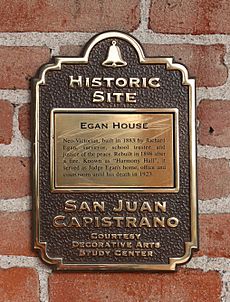 Plaques that are used to identify historic sites of the city. 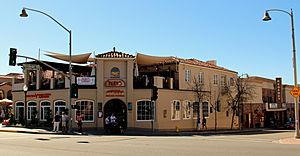 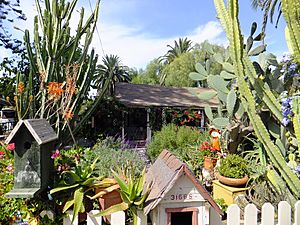 According to the city's Comprehensive Annual Financial Report from June 30, 2020, the largest employers in the city are: 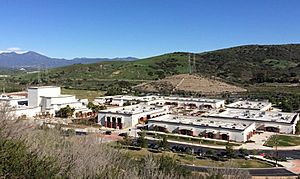 San Juan Capistrano is served by Capistrano Unified School District. In the 2007–08 academic year, San Juan Hills High School opened with about 600 freshman students. It is the city's only public high school, although a sizeable portion of San Juan Capistrano's residents attend high schools in neighboring cities since the schools in most of its neighboring cities are also under Capistrano Unified School District which is the second largest school district in Orange County.

View of the north wing of the mission from the central patio. 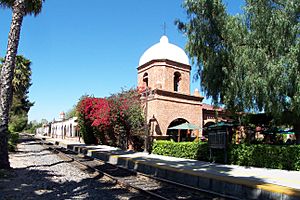 San Juan Capistrano station is served by Amtrak and Metrolink.

The Orange County Transportation Authority (OCTA) operates bus routes within the city, connecting it to other parts of Orange County. 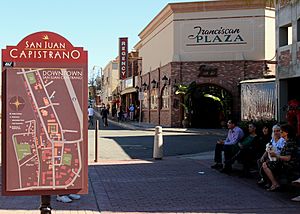 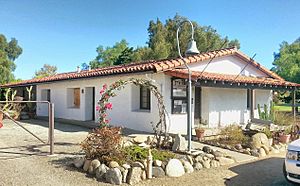 The Casa de Esperanza is on the National Register of Historic Places.

Interstate 5 has three interchanges completely located in the city (at Camino Capistrano, SR 74/Ortega Highway, and Junipero Serra Road), two interchanges partially located within the city (at SR 1/Camino las Ramblas (which is partially within Dana Point) as well as SR 73 (which is partially within Mission Viejo)), and an additional northbound entrance ramp from Stonehill Drive and Camino Capistrano.

California State Route 241, which originally terminated at Oso Parkway between Las Flores and Coto de Caza, was extended roughly 4 miles to Cow Camp Road in the community of Rancho Mission Viejo, which is located just east of the city limits.

The original route of U.S. 101 ran through downtown San Juan Capistrano on what is now Camino Capistrano. It was decommissioned when Interstate 5 was completed in the 1950s.

All content from Kiddle encyclopedia articles (including the article images and facts) can be freely used under Attribution-ShareAlike license, unless stated otherwise. Cite this article:
San Juan Capistrano, California Facts for Kids. Kiddle Encyclopedia.