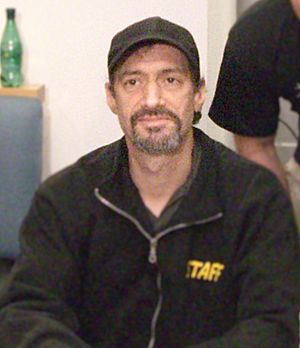 Anthony Cumia (born April 26, 1961) is an American radio personality and broadcaster. He was born in Elwood, New York.

Cumia is best known as the co-host of the Opie and Anthony radio show with Gregg "Opie" Hughes that aired from 1995 to 2014, alongside comedian Jim Norton from 2001.

In 2014, Cumia was fired by SiriusXM Radio after posting a series of tweets, which they deemed to be "racially-charged and hate-filled". He started his own video podcast soon after named The Anthony Cumia Show, which aired until September 2017. He has since been the co-host of The Artie and Anthony Show with comedian and actor Artie Lange.

All content from Kiddle encyclopedia articles (including the article images and facts) can be freely used under Attribution-ShareAlike license, unless stated otherwise. Cite this article:
Anthony Cumia Facts for Kids. Kiddle Encyclopedia.